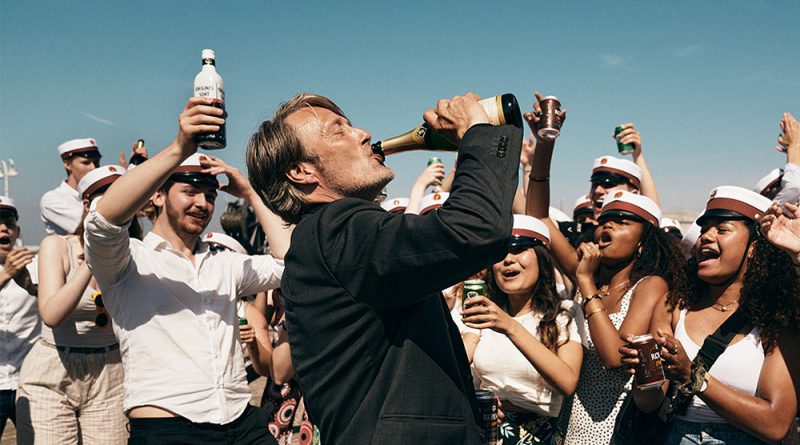 While not as famous as his fellow Danish auteur Lars von Trier, Thomas Vinterberg has been making compelling and arguably more diverse movies than his more controversial colleague for thirty years. Starring Danish screen legend Mads Mikkelsen as Martin, Another Round is a sparky yet oddly melancholy comedy about men, masculinity and that old devil, booze.

Recalling their wilder, more exciting youths, four schoolteachers – Martin amongst them – turn their discussion at one of the men’s 40th birthday dinner to the psychiatric theory that having a constant blood alcohol level of 0.05 is in fact an optimum state of being, leading to the confidence, creativity and sense of comfort that the men currently lack in their otherwise banal lives. Agreeing to give the experiment a shot, the drinking begins.

To start with at least, there are rules, and the men keep detailed records of their experiment as the drinking begins to increase in regularity and the rules become hazier. As their lives spiral, they are forced to face questions that have long gone unaddressed in their lives, demanding changes that none are wholly prepared for.

Adapted from a play Vinterberg had written about the place of alcohol in Danish society, the film is haunted by a sense of inevitability about where the experiment will lead that even the characters themselves seem aware of in some indirect way, reframing their drinking less as an experiment and more as an act of self-sabotage.

But with Vintergerg’s signature dry humour, the film still manages to be very funny – not exactly laugh out loud hilarious, but clever and shrewd and sharp and insightful and, above all else, very, very honest. Another Round is almost clinical in its dissection of men, the way they behave together and the way they internalize those interactions and make it a part of their own identities that they take into other aspects of their lives, in Martin’s case that of his home life with his family.

With one of the most beautiful and bittersweet ending scenes seen recently, the last 10 minutes alone of the film make it wholly worthwhile, especially for fans of the much-loved Mikkelson. Smart and unflinching, Another Round is classic Vinterberg, and reminds us while Mikkelson has become such a hot property not just in Denmark, but internationally.