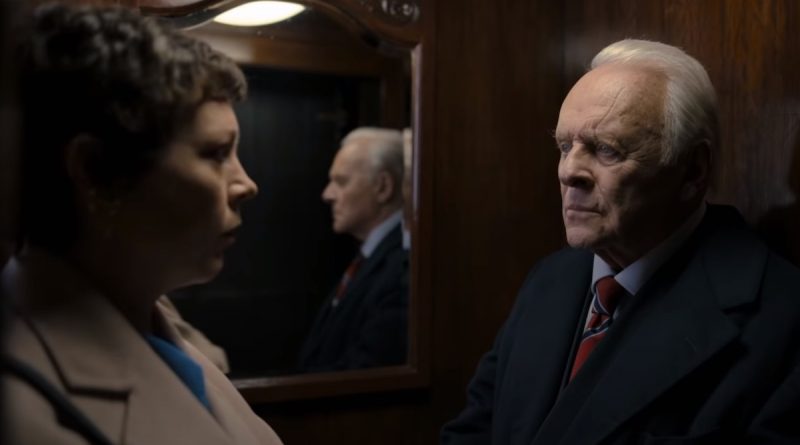 First seen sitting in a chair, reading a book while listening to classical music in his posh London flat, Anthony Hopkins delivers a heartbreaking performance as an 80-year-old gentleman trying to come to terms with the subtle disorientation of dementia.

At this point, Anthony – that’s his character’s name, since director Florian Zeller wrote the role specifically for Hopkins – barely recognizes his devoted daughter, Anne (Olivia Colman), who is trying to introduce him to Laura (Imogen Poots), a new caregiver.

Yet time plays tricks on his mind. Is Anne really moving to Paris, as she tells him in the first scene? Why isn’t she still the young woman (Olivia Williams) he remembers? Is she married to the man (Mark Gatiss) reading a newspaper who identifies himself as his son-in-law? Or does she have a different husband (Rufus Sewell)?

Where is his favorite daughter, Lucy? Wasn’t the roast chicken already in the oven? And where did he put his watch?

At times brusque and occasionally charming, Anthony is deeply frightened, trying to make sense of a harrowing world he no longer fully comprehends.

“The film is dealing with a universal subject at this very moment in our lives – with loneliness, dementia, mental illness and suicide rates going up,” Hopkins notes.

Headed toward another Best Actor Oscar nomination, Anthony Hopkins won in 1992 as Hannibal Lecter in The Silence of the Lambs, followed by his unflappable butler in Merchant/Ivory’s Remains of the Day, the title role in Oliver Stone’s Nixon, and John Quincy Adams in Steven Spielberg’s Amistad. Last year, Hopkins was nominated for Best Supporting Actor as Pope Benedict in The Two Popes.

On the Granger Movie Gauge of 1 to 10, The Father is an empathetic 8, brilliantly acted and emotionally devastating.