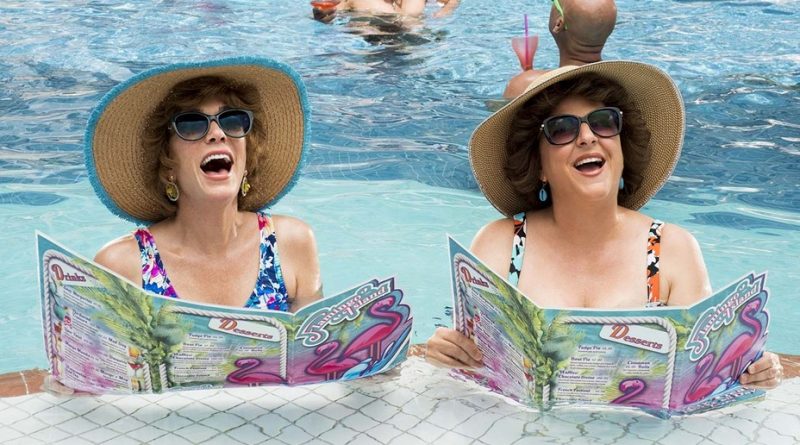 Offered up without irony or ulterior motive, Barb & Star Go To Vista Del Mar is a frothy flick that lands just in time for Galantine’s Day. It is penned by and stars longtime friends Kristen Wiig and Annie Mumolo, who garnered an Oscar nomination for Bridesmaids, only unlike the 2011 hit, this time they target 40-something besties that harbor no longterm grudges or deep-seated animosity towards each other. There are other major differences. Barb & Star Go To Vista Del Mar is a story about female friendship, yes, but told by way of Technicolor musical numbers, psychedelic vignettes, and over-the-top bananas plot devices. It’s a strange, tacky trip that works mostly through how Mumolo, Wiig, and the rest of the cast sell it, and it’s sweet and funny enough to put a one hour and forty-six minute pin in your pandemic fatigue.

Barb (Annie Mumolo) and Star (Kristen Wiig) not only finish each other’s sentences, they are thinking the same things, and saying them at the same time. These gals have lived in the same bedroom with double beds and in the same town, ever since Barb’s husband died and Star’s husband ran off with a younger woman. They love their jobs at Jennifer Furniture, their weekly get-togethers with other 40-somethings Debbie, Pinky, Delores, and Bev, and the ever-expanding collection of culottes they wear. When the duo lose their jobs, they decide to take a risk and go on a vacation to what amounts to MIDLIFE PARADISE. Vista Del Mar, a fictitious beach town in Florida, is where people of a certain age go to hear Jimmy Buffet, get ogled at by fellow vacationers, and have ‘fun’. Off they go. Unfortunately, a villainess has plans to kill everyone in that town, dispatching henchman Edgar Pagét (Jamie Dornan) to Vista Del Mar to do her dirty work. His intentions go wonky when he connects with Barb and Star. Cue the musical numbers, including one in which Jamie Dornan sings and dances in a seafoam green polo shirt. It should also be mentioned, praise Goddess, that at one point Dornan rocks black briefs like those made famous by Tom Hanks in Turner and Hooch.

Overall, this weird little soon-to-be cult favorite is a fun ride. It takes all responsibility of following plot or using one’s brainpan out of the equation. There are too few films that both unabashedly celebrate female friendship and center on women over forty out there. That makes it all the more disappointing for several reasons. These are near cliches of head-in-the-sand, unenlightened older women. Also, Barb and Star start lying to each other, and the conflict is around a man. Wiig and Mumolo redeem themselves, though, by having the characters grow as a result of this rift, both individually and as friends.

Barb & Star Go To Vista Del Mar is best experienced without much more explanation. Viewers will know within about a half hour whether it’s for them or not. With so much going on, there’s plenty to enjoy for most comedy lovers. The movie begins with a 10 year old kid delivering papers enthusiastically singing along with Barbra Streisand and Barry Gibb’s 1980 hit Guilty. Looking for something sweet and silly? Let this guileless pleasure sweep you away. As they say, ‘You’ve got nothing to be guilty about’.