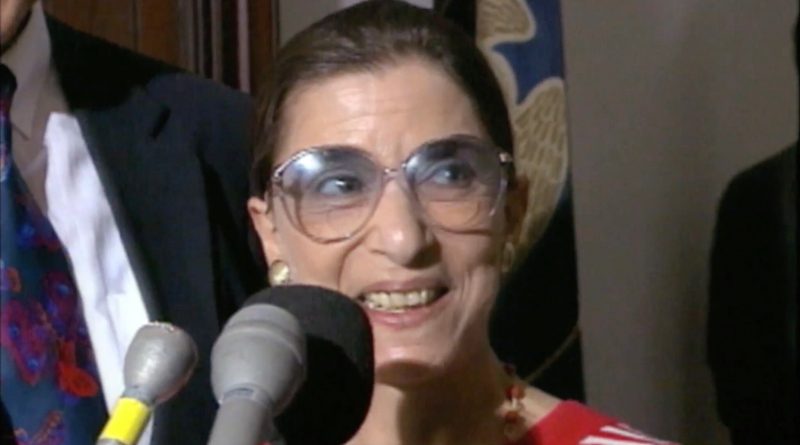 Speaking to a class of 5th graders, Ruth Bader Ginsberg enumerates the three impedimenta against her success as a lawyer when she graduated first in her class of 1959: she was a woman, she was a Jew, and she was the mother of a 4-year-old. So how, asks director Frieda Lee Mock, did Ginsburg become a Justice of the Supreme Court?

Mock answers — if, despite the title of her inquisitive film, not always in Ruth Ginsburg’s own words. The 90-minute documentary addresses the short, slow steps Ginsburg took, sometimes under force. Mock starts with Ginsburg’s challenge as a litigator for the ACLU’s Women’s Rights Project that led to landmark discrimination cases before the Supreme Court, cases that inserted the neutral word “gender” where the double-entendre word “sex” had been.

Ginsburg’s words that Mock shows in videos and film clips include those she spoke as an advocate, a judge, a professor, and a justice. Mock augments Ginsburg’s words with commentaries from, among others, Justice Goodwin Liu, who clerked for Justice Ginsburg in 2000; Irin Carmon, who co-wrote Notorious RBG; Lilly Ledbetter, lead plaintiff in an employment-discrimination case; and Jennifer Carroll Foy, among the first women to graduate from Virginia Military Institute, which was desegregated after Justice Ginsburg’s opinion in United States vs Virginia.

Given that Ginsburg’s words and those of her cadre are not all that new anymore in the franchise that is Ginsburg, and given that the documentary was polished before the justice died, making it immediately outdated, do we really need one more film about Ruth Bader Ginsburg? Asking that is like asking, Do we need all those biographies of A. Lincoln?

The answer is yes, if the film is as rewarding as “Ruth–Justice Ginsburg in Her Own Words” and yes, if we want to continue to honor all Ginsburg did for America. The documentary records slow steps toward justice, always worth measuring.