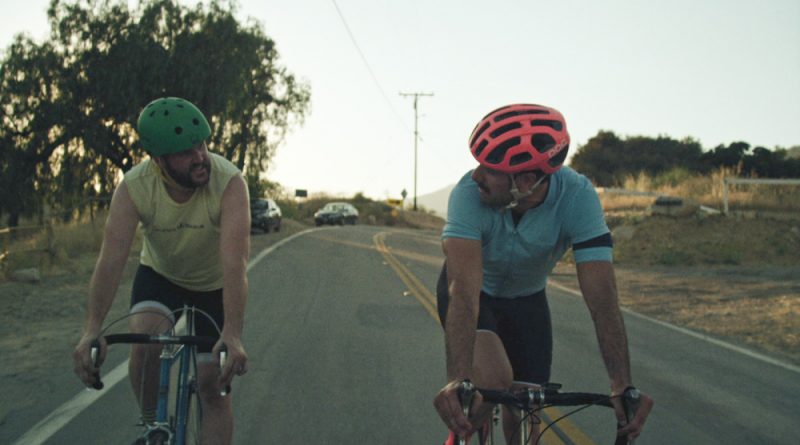 Scheduled for theatrical release last year, The Climb is now available on DVD, Blu-Ray and Digital – which is probably where this dark-toned comedic chronicle of male friendship belongs.

Adapted into a full-length feature by Michael Angelo Covino and Kyle Marvin from their 2018 Sundance-selected short, it awkwardly follows two bickering buddies – played by themselves – through a series of seven vignettes, each set in a different time and place, chronicling their uphill battle to maintain a viable, if dysfunctional relationship.

Beginning in the Midi in southern France, enthusiastic, athletic Mike is encouraging schlubby, wheezing Kyle to make this strenuous bicycle trek before he marries his French fiancée, Ava (Judith Godreche). At the crest of one of the steep, challenging hills, Mike casually informs Kyle that he’s also slept with Ava.

“What do you mean, slept?” puffs Kyle.

Not surprisingly, that information drives a huge wedge into their lifelong friendship, as Kyle observes, “You’re like a real-life Judas!”

Reckless Mike eventually marries Ava, and it’s only after she dies that he reunites with soft-hearted Kyle, who appears at her funeral, unexpectedly taking his estranged buddy’s side against some unionized gravediggers.

It seems now-alcoholic Mike was practically raised by Kyle’s parents (Talia Balsam, George Wendt); his high-school football equipment is still in the basement of their home. Plus there’s the camaraderie of Kyle’s sisters (Daniela Covino, Eden Malyn).

So spending Thanksgiving, Christmas and New Year’s Eve together is a given, even when anxiety-riddled Kyle reconnects with Marissa (Gayle Rankin), his high-school crush whom nobody else likes.

With the aid of cinematographer Zach Kuperstein, director Michael Angelo Covino utilizes extended Steadicam scenes to go with the flow, maintaining the “cadence” (one of Mike’s favorite words). And if Covino looks familiar, he plays the villain, harassing Tom Hanks in “News of the World.”

On the Granger Movie Gauge of 1 to 10, The Climb coasts in with a cynical 6, a corrosive speed-bump on the road to bromance.