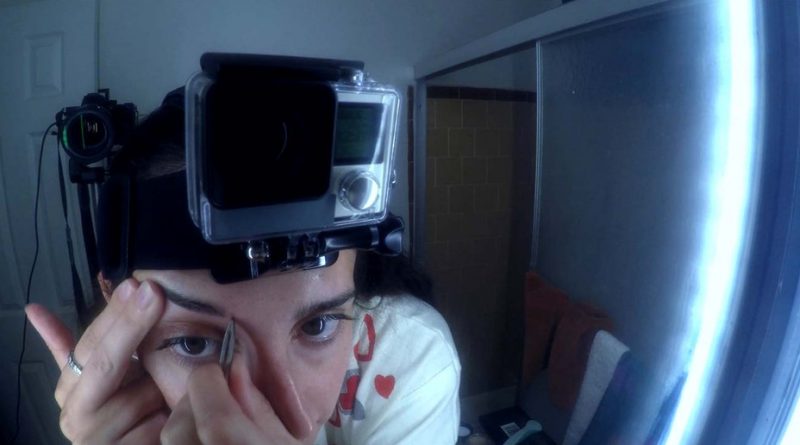 Even though she plays a character called “Gillian” in I Blame Society, I am reasonably confident that Gillian Wallace Horvat is not, in fact, a serial killer. But as director, star and co-writer of what was originally conceived in her own words as a short “Herzogian non-fiction narrative hybrid documentary”, one can be forgiven for feeling that the lines between reality and fantasy have dramatically blurred here. We are, in fact, encouraged – aggressively provoked, even – by the film (and the filmmaker) to feel precisely this.

If we err towards lazier descriptors than those Horvat herself has so colorfully selected above, we find ourselves in a critical space where words like “mockumentary”, “#MeToo”, and “horror-comedy” seem like unavoidable go-tos, which while not exactly inaccurate, somehow feel collectively a little too milquetoast when it comes to the quite dark and unequivocally magical feat that Horvat has accomplished with this low-budget indie treasure.

Based on a real-life conversation, Horvat “plays” a filmmaker who is inspired to undertake a project based on a casual observation made by two friends: that she has all the personality elements that would make her an excellent murderer. Interviewing her (real) mother and grandmother, this footage from the original short made it into I Blame Society, which collapses the lines between fact and fiction as “Gillian” decides to put the suggestion to the test. She starts off tentatively with a few home invasions, increasing to manslaughter and then embracing fully-fledged premeditated murders and rage-killings.

Available on VOD from February 12th, I Blame Society is far from a fun meta-genre experiment, although that is certainly part of its appeal. The real guts (for want of a better word) of the film lie in the fact that regardless of how unpleasant and unhinged “Gillian” seems at times (I refer here to the character, not the filmmaker herself), if she blames society, so ultimately do we. They are different films for different times to be sure, but something about the raw fury and darkly comic approach of I Blame Society recalls strong echoes of Sarah Jacobson’s punk feminist indie masterpiece, I Was a Teenage Serial Killer from 1993. In both of these films, we are presented with women characters for whom zero attempt has been made to make them likeable or (god forbid) “soft”, as women in film are so often encouraged to be. Additionally, the protagonists from both films respond to the spectrum of misogyny around them through a conscious release of repressed rage, culminating explicitly in a climactic call from both films’ central women characters demanding the right to tell their own stories their own ways.

This is by no means to suggest I Blame Society is derivative – it is far from – but there is a shared spirit here that perhaps indicates that the late Jacobson’s legacy still endures over fifteen years since her death. Whether consciously or not, Horvat brings the same wit, the same energy, the same fire into the present moment in a way uniquely her own. I Blame Society is funny, unapologetic and packs a mighty punch on the gender political front that so many films today flirt with but ultimately step back from when it comes to the crunch. This is a special film by a special filmmaker, a position I would still maintain even if I wasn’t just a tiny bit apprehensive that the filmmaker might kill me if I suggested otherwise.