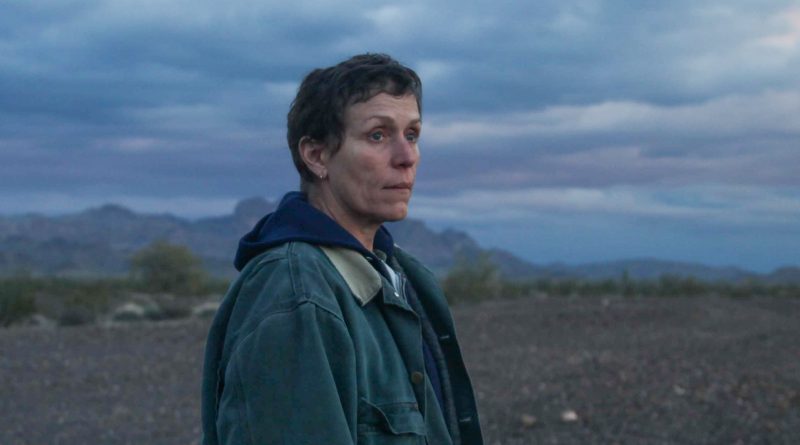 Anyone who saw director Chloé Zhao’s impressive film, The Rider, expects her imprint to embellish, her choices to be signatory. Zhao’s screenplay, although based on Jessica Bruder’s eye-opening exposé about the lives of older, rootless workers, skews Bruder’s emphasis to Zhao’s. Like The Rider, Nomadland amalgamates documentary with narrative forms of film.

Zhao focuses on Fern, a woman in her sixties (what the French politely describe as “a certain age”). Fern has lost everything. Not just her job, but her home. She lived in U.S. Gypsum’s company town. The company went belly up in 2011, erasing the town’s existence right down to its ZIP code. Fern lives out of her van, named Vanguard and outfitted to suit Fern’s almost-every need. No, she is not homeless — just houseless.

Singing Greensleeves along the way, Fern travels to the West to contend with the “tyranny of the dollar.” Here, she hoists Amazon’s bubbled packages in screaming-yellow bins; there, she wipes down effluvia in a park’s bathrooms or cooks at Wall Drugs in South Dakota. A saving grace in addition to her independence is the community of fellow nomads. These are also elders shlepping from job to job, dune to parking lot, storage unit to flea market. A leader, Bob Wells, offers compassionate counseling to the wanderers.

Zhao hired real nomads to play themselves, Linda May and Charlene Swankie, among them. The amateurs play well with the professionals, especially always amazing David Strathairn (Good Night and Good Luck). The cast is led by co-producer Frances McDormand. The always impressive, dependable McDormand (Fargo) inhabits Fern like a favored, if ratty, sweater.

Nomadland is visibly enhanced by Joshua James Richards’ stunning cinematography (but he did have the American West to work with). Zhao’s screenplay includes great swaths of silence. She concentrates on Fern and on the community whereas Bruder balanced the nomads with their back-breaking, hard-slogging work, little of which is shown except in drone-distanced shots of the Amazon warehouses. That is Zhao’s prerogative as director. Reading Bruder’s book provides more range of motion and emotion.