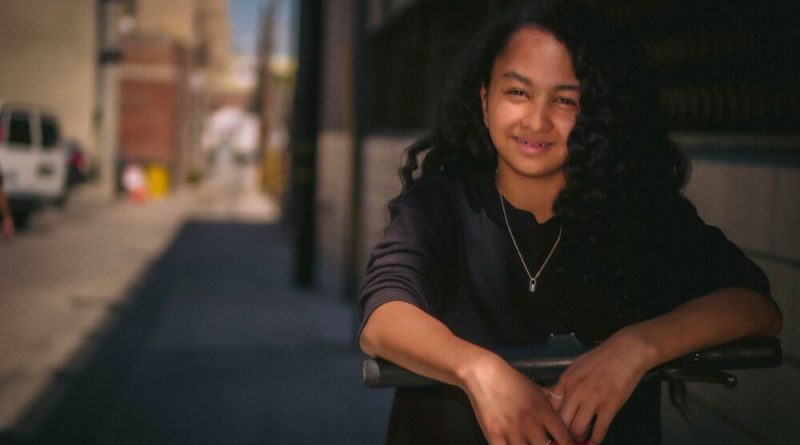 Imagine that you are a young teenager and your very first film is up for the most prestigious cinematic awards. This is exactly the place where 14 year-old director Kalia Love Jones, a teen animator and filmmaker, finds herself for her film, The Power Of Hope.

This young filmmaker wants to empower others with The Power of Hope, her first film. The short film. which she wrote, directed and produced, came from an idea that came to her while she was listening to a Michelle Obama speech. It’s an inspirational story of a young woman with big dreams, and it has caught the attention of critics and general audiences. In the film, an aspiring young female architect feels helpless when her mother falls ill, but when she is moved by the words of former First Lady Michelle Obama, she finds the will to persevere and bring her dreams to life.

The Power of Hope is now qualified for the Academy Awards and the Peabody Awards. Kalia Love Jones is the youngest director ever selected to be part of the Oscar qualifying Pan African Film and Arts Festival.

Additionally, Ms. Love Jones is the youngest filmmaker ever to be nominated for an NAACP Image Award in the Motion Picture category of Outstanding Short Form (Animated). She was also selected as an Everyday Hero for her inspirational film at the 2020 Univision Premios Juventud (Youth Awards), an award show for Spanish-speaking celebrities in the areas of film, music, fashion, and pop culture and she was one of 50 finalists nominated for Time Magazine’s Kid of the Year 2020 Awards.

As a young female filmmaker with many mentors, Kalia Love Jones looks up to Michelle Obama, Oprah Winfrey, Ava DuVernay, and Rebecca Sugar and spends hours every day studying films to create unique animations. A risk taker, Kalia uses film to send powerful messages that prove anyone can push through obstacles in life and reach their goals. April Neale: When you were 13, what was the inspiration for creating this film? Why a film over a book or a piece of art?

Kalia Love Jones: I think I always knew I wanted to be an animation filmmaker. It’s been a passion of mine since as long as I can remember. When I was 12 I started creating the story for The Power of Hope. I wanted to create something visual and moving and inspirational. Michelle Obama has been a huge inspiration for me so I wanted to send that same message of hope.

AN: \You have said you want to be a filmmaker professionally, tell me about the women in film you admire?

KLJ: I’m a big fan of a lot of women directors. I think the women I look up to for motivation are Ava Duvernay, Patty Jenkins and Regina King. Seeing the success that these women have had and how confident they are is so amazing.

AN: Have you connected to anyone in film, or Black filmmakers or any mentors yet? Tell me why you admire them too.

KLJ: Yes, I have been so fortunate that The Power of Hope has received such attention. I was able to talk to some wonderful women directors and writers and producers who have been super supportive. Latoya Raveneau, the director of the new Proud Family series on Disney+ was really great to talk to.
One of the first people to reach out and support me was Lyndon Barrois. He’s a really amazing talent and a great resource for advice. I’ve also met with so many people from Disney and DreamWorks and Field Day entertainment, Harpo and The Obama’s production company Higher Ground.

AN: You have said you plan on staying behind the camera, have you learned about any production skills in making this, or has the work solely been through the computer?

KLJ: I learned so much about production while making The Power of Hope. I think the biggest thing I gained was confidence. Naturally I’m very shy but I started to overcome my shyness and better express what I want to see in my film.

KLJ: Everything I learned about filmmaking before The Power of Hope was from online resources. I don’t think I could have done any of this if it was ten years ago. Today you can practically learn anything from YouTube. I also was able to reach out to people in animation over the Internet.

AN: Who are your heroes?

KLJ: Michelle Obama is my biggest inspiration right now. She’s so smart and just beams confidence. If I start to lose my own confidence, I try to imagine Michelle Obama in my shoes. How would she handle this situation. It sounds funny but I promise you it works. My other heroes are Ava Duvernay, Oprah Winfrey, Regina King, Patty Jenkins and Rebecca Sugar, to name just a few.

AN: If you could tell Michelle Obama anything, what would it be?

KLJ: Oh my gosh I have asked myself that so many times. I’d probably blow it and just start crying like a weirdo. When Michelle Obama had her book tour, my dad bought me tickets and I was so hoping to get close to her at the event. But I was way in the back behind probably thousands of fans. It was really amazing just to be in the same place as her for awhile. But to answer your question, I’d probably ask her how she’s always able to command a room.

KLJ: Actually the main character is based on me and my look. I used her passion as an aspiring architect as it relates to art and bringing an idea to life. I have been very fortunate that I haven’t gone through the struggles my character has but I felt people could relate and find inspiration in the story.

KLJ: I recently watched One Night in Miami by Regina King and it was very moving. She’s an amazing director and deserves all the accolades she’s receiving. I watched Wonder Woman by Patty Jenkins and it was phenomenal. I can only imagine working on a movie that big. I loved Little Women directed by Greta Gerwig.

AN: You are very resourceful, recycling to raise money, talk about not being too important to do what it takes to raise capital to fund your vision?

KLJ: I actually started recycling way before I had my movie idea. I was in elementary school and helping a janitor. I noticed he was separating the can and bottles in a different bag so I asked him why. He told me you can make money by recycling. I also saved up my money from Birthdays and Holidays and jobs I’d do for my family. Luckily I’m a homebody and don’t buy anything except for art supplies so the money started to accumulate. When I decided I wanted to make a film, my dad said I had to use my own money. When it’s your own money, you tend to get creative and not waste even a dime. That was a great lesson in budgeting.

AN: What is next for you? If college, where do you want to go, Cal Arts? USC?

KLJ: I’m currently working on my next project. It’s an animated series that I feel is really unique and the entire family can enjoy together. Hopefully I can pitch it to a big company like Disney, Netflix, HBO Max or Apple TV and networks like Nickelodeon. I’m also nominated for a NAACP Image Award and a Pan African Film and Arts Festival Award for The Power of Hope. The Power of Hope animated short film is qualified for the Peabody Awards. I really want to win the Peabody Award. Winning would literally make my career in animation possible. For college I think I’d like to go to CalArts or USC. Both are local and my mom is a USC alumni.