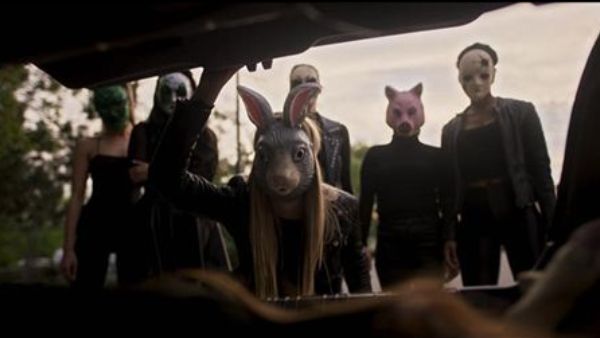 Over determined nonsense wrapped in atmospheric cinematography and solid performances, The Sinners (aka The Color Rose) is the kind of superficially sophisticated genre film that makes unabashedly dumb-as-dirt old-school thrillers look good.

Directed and co-written by Courtney Paige and narrated from beyond the grave by pretty dead girl Aubrey (Brenna Llywellyn), found on the shore of a local lake with an American Beauty-rose delicately placed between her lips, Sinners is a sleek undermining of pop-culture mores that never rises beyond waspish snark.

Aubrey was a typical small-town, high school girl. Assuming, of course, that the small-town is next door to a pulp-fiction morass of secrets, lies and toxic relationships that define movie milieus from David Lynch’s Blue Velvet (1986) to Netflix’s ongoing Riverdale, a scabrous reimaging of the comic book universe that made Archie, Jughead, Betty and Veronica into squeaky-clean teen icons.

The location is a 21st-century version of the town that banned dirty dancing: Repressed, relentlessly white–save the token brown-skinned girl (Keilani Elizabeth Rose) who’s as shallow and privileged as her pale-skinned posse. Deeply Christian and profoundly hypocritical, it looks like an ideal refuge from nasty old big dirty cities until innocent Aubrey is found murdered. Her high-school classmates are plunged into an ugly morass of suspicion and fear, signaled by the creepy sequence in which Aubrey is abducted by a girl gang hidden behind animal masks. It’s hard not to recall 2008’s brutal The Strangers, in which a pod of clueless middle-class folks are terrorized by ruthless intruders wearing animal masks. Yes, there’s a Laura Palmer vibe here, but it’s a red herring; The Sinners, aka The Color Rose, is just a by-the-numbers stalk/slash movie pretending to be about something more.

Sinners is clued in to how incestuously suffocating teenaged girls’ friendships can be, which isn’t a revelation but is valid and the film’s oppressive Christian-indoctrination background rings true. But it still feels twice as long as it is because honestly, not news.