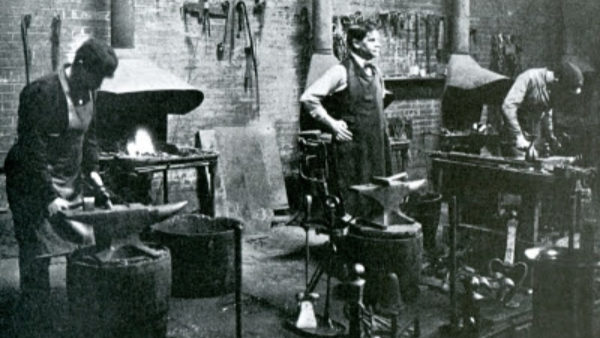 Gustav Stickley: American Craftsman is the kind of niche documentary that is likely to appeal to a very limited audience. But, for that audience – people who love furniture and design or just want to learn more about them – it’s a must-see.

Considered the founder of the American Arts and Crafts Movement, Stickley was born in Wisconsin in 1858. Although he had very little formal education, he was responsible for an entirely new approach to furniture and many of his guiding principles are as relevant today as they were more than a century ago.

Stickley is often referred to as a “lifestyle entrepreneur,” and it’s easy to think of him as the inspiration for Ralph Lauren – not in his specific style but in his philosophy. Stickley was all about home, and he made people really think about the things they surrounded themselves with. His own home – which is a treat to see in the film – was filled with his pieces, each one lovingly and intentionally placed to serve a purpose.

The idea behind Craftsman furniture is that it meets a real need, and that great thought and care are put into its creation. Each piece proudly reveals how it’s made – joints are visible, dowels are exposed. Director Herb Stratford gives historians, fans and Stickley’s family the opportunity to wax poetic about Stickley’s pieces “wearing their inside on the outside” and “letting their integrity manifest itself.” It’s eye-opening, especially since it translates to a way of life that goes well beyond furniture.

Believing in “a higher ideal of home life,” Stickley not only celebrated furniture and design but he also started The Craftsman magazine and a reform movement that made significant strides for women’s rights, the environment, and children’s rights in the workplace. He opened a restaurant on the top floor of his Fifth Avenue department store, with all the food grown on his own farm.

The man walked the walk.

Stickley’s vision could only be taken so far, though, and in 1915, he had to file for bankruptcy. Over time, the Arts and Crafts Movement itself has also gone through periods of ups and downs but it has never completely disappeared. In fact, it’s actually experiencing a resurgence, with the Museum of the American Arts & Crafts Movement scheduled to open soon in St. Petersburg, Florida.

Don’t be surprised to start seeing more Craftsman-inspired furniture popping up in magazines and Stickley’s “lifestyle” concept embraced as we are all stuck at home during the pandemic.

And as word spreads about this fascinating documentary, it may no longer be accurate to call it a niche.