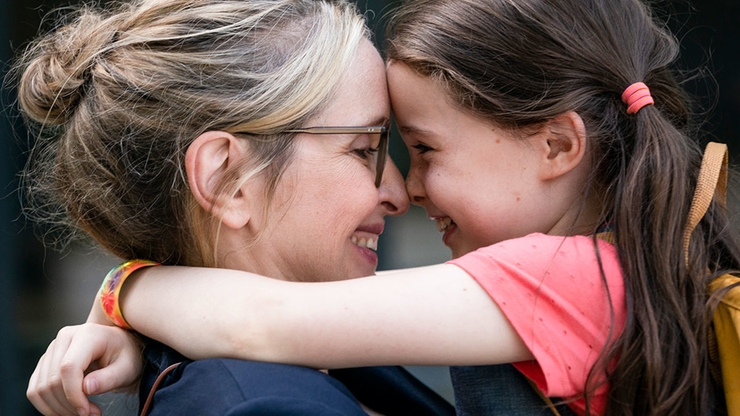 Like Kramer vs. Kramer by way of The Twilight Zone, French writer/director Julie Delpy’s compelling drama My Zoe examines the depth and fierceness of maternal love. It centers on Isabelle (Delpy), a woman who will take every risk and push every envelope in the name of her beloved daughter, Zoe (Sophia Ally). But is she acting in Zoe’s interests or her own? Isabelle, a scientist who loves her work, shares custody of Zoe with her estranged husband, James (Richard Armitage). James blames Isabelle for the family’s separation, and the two argue frequently — he seems to doubt her dedication to Zoe and question her skills as a mother, and she lashes out at him for using custody details to cause issues in both her professional and personal life. When Zoe ends up in the hospital, unresponsive, Isabelle and James are united in their worry and fear, but they also continue to hurt each other, giving voice to all of their deepest recriminations against each other.

To say much more about the story would be to reveal its most interesting twists. Suffice it to say that it goes places you wouldn’t expect from a dialogue-heavy European family drama, but its very subtle “near future” production design elements (most notably, Isabelle’s phone/watch combo) end up being quite relevant. And there are welcome late-in-the-game appearances by Daniel Bruhl and Gemma Arterton.

But ultimately this is Delpy’s movie — both as a writer/director and as an actress — and, all plot twists aside, it’s about the life-changing nature of motherhood. Ethics, odds, and pessimism are all brushed aside: There is nothing Isabelle won’t do for her Zoe, and no other relationship can compete with the one she has with her daughter. — Betsy Bozdech

Pam Grady: The lengths a mother will go to for her child lies at the heart of Julie Delpy’s provocative drama. The writer-director stars as Isabelle, a scientist devoted to her young daughter Zoe (Sophia Ally) but engaged in a bitter custody battle with James (Richard Armitage), the child’s father. When the little girls falls desperately ill, Isabelle’s desperation drives her to extreme measures in her zeal to be reunited with a healthy Zoe. A devastating portrait of a curdled relationship in the film’s first half gives way to a charged story of the boundaries Isabelle is willing to cross on behalf of Zoe. Delpy’s clever script limns a woman so absorbed in her emotions that she plunges forcefully into an ethical quagmire. My Zoe raises a lot of questions as the filmmaker spins her resonant tale.

Leslie Combemale My Zoe Writer/director Julie Delpy stars as grieving mom Isabelle, who, rather than succumbing to her bottomless feelings of loss, searches for a novel way to cope with the death of her daughter. “There is not one word in any language that defines losing a child”, she says, as a way of explaining her suffering. Surrounded by talented fan favorites Gemma Atherton, Daniel Brühl, Lindsay Duncan, and Richard Armitage, Delpy’s story and central character Isabelle offer a unique sci-fi tinged perspective that only the female lens could provide. Though requiring a significant suspension of disbelief, My Zoe is anchored in emotional realism, so we follow her as she tumbles headlong into a moral and ethical morass with the fearlessness and commitment only a mother can muster.

MaryAnn Johanson Julie Delpy’s sci-fi take on grief is a heartbreaking and profoundly humanist examination of where the future may take us when it comes to coping — or not — with the loss of our loved ones. Full of pain and often difficult to watch, her film does not shy, right up until its final moments, from the toughest questions about how we use technology, in a way that is remarkably free from moralizing. Because we haven’t yet figured out the morals of what it depicts, something that will almost surely come to pass, if it hasn’t already. This is the best kind of science fiction, raising questions without presupposing the answers.

Susan Wloszczyna: Ever since I first saw Julie Delpy in Before Sunrise, the first film in Richard Linklater’s top-notch romantic trllogy, I’ve always found her to be casually mesmerizing and naked with her feelings in a way that only a handful of actresses could ever achieve. That is also true with her latest project, “My Zoe,” where she proves to be a triple threat as the female lead, director and writer. Read full review.

Jennifer Merin My Zoe is writer/director Julie Delpy’s compelling family drama in which divorced parents, Isabelle (played by Julie Delpy) and James (Richard Armitage), are warring over the custody of their darling ten year old daughter, Zoe. The ex-couple’s marital anger and parental anguish are played out blow by blow — until the plot takes an unexpectedly strange and strangely unique twist that sets the film and its story apart from other custody dramas by delivering it into the realm of sci-fi fantasy. Always at the heart of My Zoe‘s heartbreaking angst and that surprising genre shift is the ever powerful love of the mother — brought to life with sensitivity and subtlety by Delpy — for her daughter. Isabelle/Delpy will do anything to the end of possibilities to save that most precious relationship.

Sandie Angulo Chen: Writer-director-actor Julie Delpy’s film My Zoe starts off as a compelling internationally set relationship drama about a sophisticated divorced couple ironing out the details of their custody agreement. Isabelle (Delpy), a geneticist, and her judgmental, condescending ex James (Richard Armitage), an architect, share equal time with their daughter, Zoe (Sophia Ally). After a sudden illness hospitalizes Zoe, Isabelle seeks unethical help from a fellow scientist (Daniel Bruhl). Delpy gives a nuanced and touching performance as an intelligent and dedicated working mother desperately trying to find a silver lining to a horrible situation. Regardless of whether audiences agree with Isabelle’s decisions, they will likely empathize with this portrait of a mother in despair.

Loren King Julie Delpy’s intriguing My Zoe is an intimate and ambitious take on motherhood that mixes heart wrenching divorce drama, science fiction and thorny moral questions regarding reproduction. Delpy, who wrote, directed and stars in the film has, in her sophisticated seventh feature, taken on a complex, ultra modern subject. This is the kind of movie with a plot twist so crucial that one can’t divulge it. Read full review.

Nell Minow: It is a challenge to combine blistering scenes between hostile exes and thoughtful explorations of medical ethics, but writer/director/star Julie Delpy brings it all together as an exploration of devastating grief. It extends beyond the central loss of the film; the former husband and wife both refer to her father’s death as the event that led to their disconnection and ultimate separation. And she lets us make up our own minds on her character’s decisions.

Liz Whittemore The first hour of My Zoe is a devastating experience of emotional turmoil. You endure every single personal blow thrown at Delpy’s character Isabelle. In dialogue that is anything but arbitrary, we become entwined in what it feels like to be a modern mother. Guilt, anxiety, frustration, and grief envelop the audience to the nth degree when tragedy strikes. Morality issues arise as the plot takes a hard left turn into sci-fi territory that doesn’t necessarily seem so farfetched nowadays. Julie Delpy gives us her heart and soul, grounded in possibilities that feel plausible. She is every parent faced with the unthinkable. My Zoe is almost two separate films in one. It will challenge every viewer’s sense of right and wrong and force them to confront the age-old question, “How far would you go for love?” Brace yourself for this one.