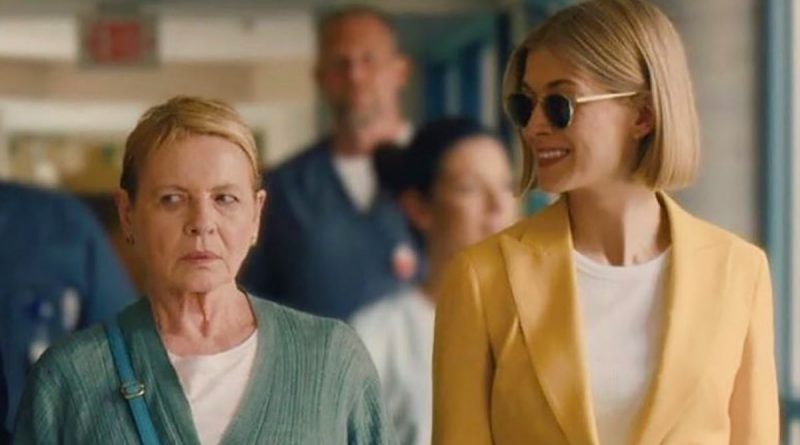 I Care a Lot is a wild ride of a movie – which is definitely not what you would expect from a story about legal conservatorship.

Rosamund Pike is riveting as Marla Grayson, a legal guardian who preys on the elderly. She seeks out retirees who have no family but plenty of money, then pays off a doctor to declare them mentally incompetent so she can be named their legal guardian.

Her latest victim is Jennifer Peterson (Dianne Wiest), an obviously capable older woman who is happily living out her golden years. In a truly jaw-dropping scene, Marla shows up at Jennifer’s door to give her the shocking news that she is now responsible for her and, helpless to fight it – Marla’s got legal documents and police accompaniment – she’s whisked away from her former life to a nursing home.

Although she’s assured she will be treated like a queen, she’s stripped of her cell phone – her only connection to the outside world – and, when she complains, she’s given drugs to calm her down. Meanwhile, Marla and her partner in both business and romance, Fran (Eiza González), are selling off her house and her considerable assets.

The whole thing is terrifying, especially to viewers of a certain age, because incidents like this really happen and people’s lives are destroyed in a second.

It soon becomes apparent, however, that Marla has messed with the wrong woman. Jennifer has a few secrets – and some dangerous people who are looking for her.

I’m not going to give anything away but you’ll be on the edge of your seat for much of the movie and you’ll find your mind blown by having to decide which villain to root for. For such a serious topic, I Care a Lot is surprisingly fun to watch, thanks to stellar acting and razor sharp dialogue.

Pike is in sociopath Gone Girl mode here, and her nonchalant attitude toward the cruelty her victims experience is bone-chilling. Wiest is simply perfection, with her sweet, crinkly-eyed smile belying her fiery spirit. And Peter Dinklage is a worthy opponent for Pike’s Marla.

I Care a Lot joins Promising Young Woman in a welcome, new, creative genre of films that present really important topics in a fresh, original way and make people pay attention. Rather than preach or lecture, they get their point across by brilliantly using dark humor and eye-popping style. It is impossible to look away. And it’s impossible to stop thinking about these stories.

I hope I Care a Lot will actually make a difference. And I hope, while I’m writing this review, that someone else is writing an article about what you should do if you ever find yourself in Jennifer Peterson’s situation.