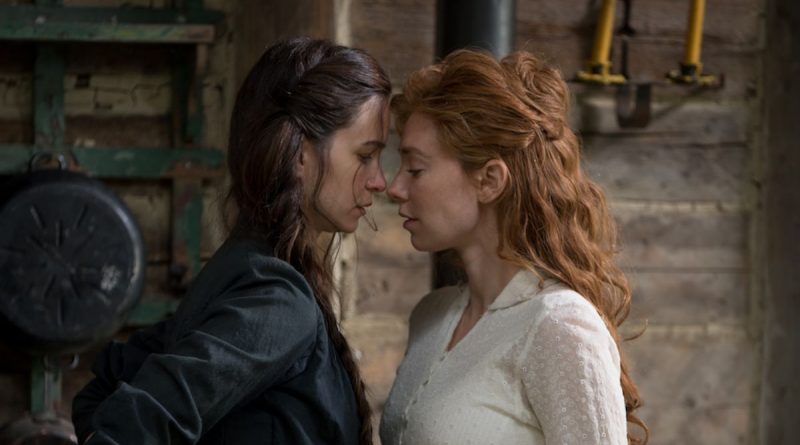 Abigail’s journal begins on Jan. 1, 1856: “With little pride and less hope, we begin a new year.” Her soft, plain voice, intoning her written words aloud, drives “The World to Come” as surely as the hand-lettered dates on its pages. The film is beautiful, sad, historical, and hopeful.

As the title suggests, Heaven, the world to come, holds hope for women like Abigail. She milks the cows, kneads the biscuits, feeds the chickens, knits. Grieving the loss of her daughter to diphtheria, she withholds herself from her dominant husband’s desires.

After another couple rents a nearby cabin, Tallie pays Abigail a neighborly visit. With hands to waists and the merest of courtly bows, each introduces herself: “I’m Abigail.” “I’m Tallie.” The slow dance of friendship begins and grows with shared chores and with truths about their husbands. The choreography, which starts as a line dance, couples into a waltz with white chambray and neck lace pushed aside for intimacy.

The women resemble the protagonists in Two of Us, the recent film of long-time lovers, but Tallie and Abigail are new at this, and the settings are more than a century ago, in the American East, not France. But their love is just as true and just as defended under the trustworthy pen of Ron Hansen (Mariette in Ecstasy), who wrote the screenplay with Jim Shepard. Their dialogue echoes women who learned English from Pilgrim’s Progress.

Hansen and Shepard grant historical power to the farmer husbands (Casey Affleck and Christopher Abbott) yet keep them in the background. Director Mona Fastvold occasionally accedes her lenses to the beautiful and demanding countryside but focuses on the seductive work of Katherine Waterston (Fantastic Beasts) and Vanessa Kirby (Pieces of a Woman). The writers and director satisfy everyone who’s ever wished that movies told women’s more riveting stories rather than men’s duller ones.

Evocative tales of frontierswomen tuck away the theme of loneliness. Carrie Young’s Nothing To Do but Stay and Elinore Pruitt Stewart’s Letters of a Woman Homesteader take place out West, but back East, pioneers like Tallie and Abigail wrestle with overweening loneliness in the flesh. “The World to Come” offers a delicate and passionate note of courage in love.