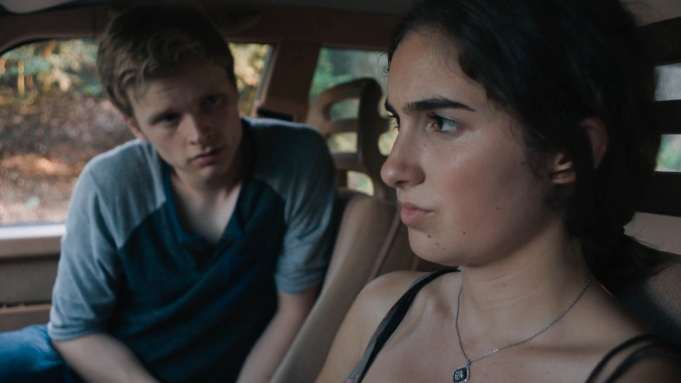 Grief does not take a holiday. It is not on your schedule. It is a physical state of being, and hits everyone close to a death in different ways.
It follows the loss of love by betrayal, a lifestyle, a pet’s demise, a child’s life taken too soon, a parent’s painful slow deterioration and on and on. For 16 year-old Sophie Jones, grief hits at a time in her life when sensual awakenings and the endless possibilities of the future are swirling in her mind. Mixed emotions are writ large as Sophie, grieves the death of her mother. How Sophie grieves and her reactions to family members also in mourning — some more than others — is the heart of director Jessie Barr’s profound coming of age film. The film is a cathartic look at how we process a loss at different depths and paces when it presents itself.

It is obvious that director Jessie Barr and star Jessica Barr (they are cousins) have walked this gauntlet in their lives. Each of them lost a parent during her teen years. As they bring this story to light, each scene bathed in the color blue and underscored with the verdant backdrop of Portland, Oregon, which also serves as a character in the film.

Grief is deep gutting hurt for Sophie, and we see her trying to deal with her distraught feelings via the sexual fever that take is awakening in her. Her physical encounters are clearly her body and mind seeking distraction and relief in a tangible salve from her pervasive sadness.

The film begins with Sophie taking in her late mother’s things, using her senses to relive what once was present. Her mother’s smells and even a taste of cremains as Sophie is surrounded by the ghost of a woman no more. Sophie is very attractive, has friends and love interests and a burgeoning sexual awareness that demands action. When to grieve and how to act are huge questions for her as she experiences never-before-felt feelings about sex in general and the death of her mother.

It is clear that Sophie took her mother’s death much harder than her father did. He’s doing his best to make life appear normal. He does not exhibit any outward signs of grief as he cheerfully makes sit-down dinners for Sophie and her sister. Despite his odd menu planning and choices of Brussel sprouts served with spaghetti and meatballs and corn, he does his best. But he appears to not be consumed by any grief and is ready to resume life, which unnerves Sophie and creates a schism, heightened when her dad’s new love interest comes for the meet and greet dinner.

Sophie is an aspiring actor, and she does veneers and facades quite well. She is in with the in-crowd and parties it up/ She has romantic dalliances/ She continues her theater classes as if all is fine. How she copes with her grief is private, but revealed to is in her solitary snapshots. The grief monster does not allow her to fully be present in any interactions, except in one scene with her sister, when the two commiserate and share their feelings in a safe, soul baring place.

How people react to loss is always a wild card. The age of the person makes a difference in the ways it is exhibited. Sophie has the whole world ahead of her, and in this film she is reservedly two steps forward, one back as she eventually heads east to college, but not without collateral damage with some boys who are interested in her, for different and mostly self-serving pleasurable reasons. It is a refreshing twist to not have these love interests’ stories subsume Sophie’s journey, as this film keeps it tight on Sophie’s relationships with her girlfriends, sister and the memory of her mother.

Cinematically, the film’s visuals fight against any instinct to lens the drama in the shadows to enhance the feelings of loss and depression. The shots are sunny, belying the Pacific Northwest’s typical overcast days. The palette feels cool, painted with blue walls and filters, and the mossy green explosion of coastal Oregon. DP Scott Miller does a brilliant job framing shots and capturing the feeling that life goes on, despite emotional pain. Also propelling the story is the energetic score delivered by composer Nate Heller.

Much like when a child dies young or before a parents’ death, this melancholic yet oddly positive film is an intense study of a young woman who is awakening to her sexuality and it’s power, while managing deep seated feelings of loss and sadness. Life goes on, but not without extracting pieces of your heart and soul along the way. There’s no other choice for any of us. Ultimately, the film leaves us with the feeling that Sophie will prevail.