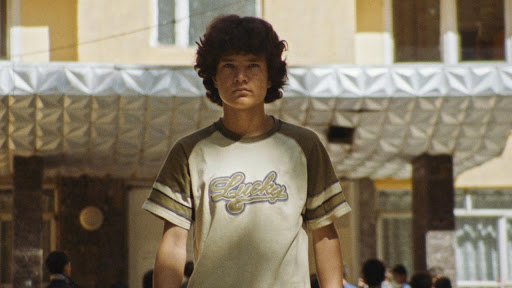 Boys will be boys, no matter what their nationality or beliefs. That thought resounded in my head throughout The Orphanage, a coming-of–age tale that is the second cinematic chapter of a planned five-part series directed by Afghan director Shahrbanoo Sadat.

The time is 1989 and the place is Kabul. That’s where we first meet 15-year-old movie fan and street kid Qodrat (Qodratollah Qadri) who earns his keep by selling key chains and scalping movie tickets. That is, until he is caught by the authorities and is taken to a Soviet-run detention center for juvenile delinquents. He quickly makes friends with four other newbies, including Masihullah, 14, and his red-headed nephew Fayez, 16.

Yes, the bullies among the males initially harass them, giving them a hard time about sleeping arrangements and such. But the facility is a godsend for Qodrat and his new pals, as they are provided with food, clean clothes, recreational time and most of all an education. There are also girls around as well, with one lovely who introduces how our young tight-lipped hero processes his emotions – with Bollywood-like interludes, complete with a romantic song and scenic backdrops.

While fantasy plays a part in the film, so does reality. The director of the center is played by Anwar Hashimi, whose unpublished diaries are the source for Sadat’s scripts. He is a grounded father figure who goes out of his way to show caring and kindness with his wards, while keeping the alfa-males at bay.

A trip to Moscow allows those with chess ability to compete against Russian counterparts and soccer games allow the adolescents to blow off steam. But when a tragedy occurs — one that anyone paying attention would see coming a mile away — Qodrat once again experiences his feelings through a musical tribute to a close pal. One last terrible loss happens after the Russians withdraw from Afghanistan while the Islamic State takes over the center and Qodrat envisions himself and his young cohorts as avenging action heroes.

If “The Orphanage” does anything right, it will likely leave you wanting to know more about what happens next with these characters and the turmoil-filled land they live in.