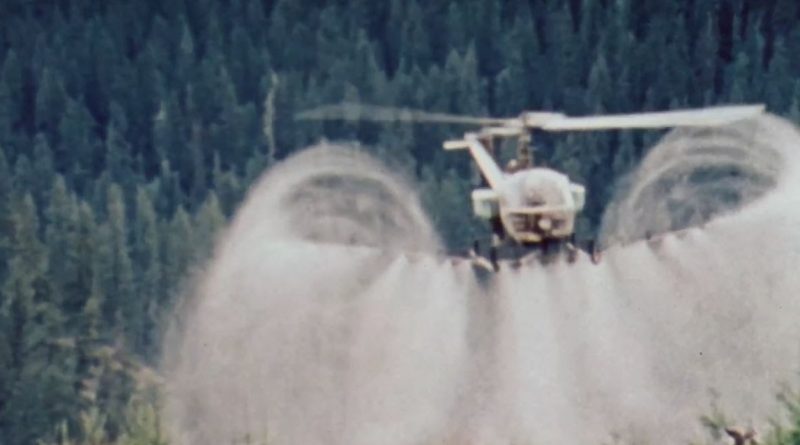 The Vietnam War may have ended, but the fight against the use of the chemical compound Agent Orange is far from over. Two women from opposite ends of the globe are united in their battle to hold the manufacturers of the toxic defoliant accountable in co-directors Alan Adelson and Kate Taverna’s documentary, The People vs. Agent Orange.

The fallout from Agent Orange – widely used by U.S. soldiers to disrupt the supplies of the Vietcong troops during the Vietnam War – has long been noted with more than four million deaths in Vietnam, Laos, and Cambodia linked to its use. Known for causing cancers, tumors, severe illnesses and internal and external deformities in humans and animals, the use of the chemical was banned overseas in 1971. But, closer to home, aerial spraying of the chemicals continued to be used in deforestation practices in Oregon through the late 1970s, with variations of the compound continuing to be sprayed in defoliation today.

Now, The People vs. Agent Orange follows Tran To Nga, a Paris-based Vietnamese activist, and Oregon environmental activist Carol Van Strum in their fight against the major chemical companies who continue to claim their defoliants are safe, denying the long-term effects of Agent Orange on humans and animals. With each woman engaged in a David vs. Goliath-sized battle, Nga is suing 26 American chemical companies for her poisoning in Vietnam via the French court, while Van Strum fights a decades-long battle to stop toxic spraying by the American timber industry.

Working as both a history lesson and an investigative documentary, The People vs. Agent Orange unites these activists in their fight to support the multigenerational victims including the Vietnamese people, U.S. war veterans and their offspring, and those in Oregon’s forests, all of whose high prevalence of miscarriages, Leukemia, Parkinson’s, type-2 diabetes, liver cancer, and birth deformities are conspicuously tied to chemical spray schedules.

The directors have clearly done their homework in speaking with retired military personnel, doctors, lawyers, activists and grassroots campaigners, and survivors. Though there are archival statements, notably absent, however, is a recent interview from a chemical company spokesperson. While one might suspect what the manufacturer’s spin doctors would say in 2021, having one more on-camera statement would only further the years-long government cover-up the activists in the film allege and illustrate the deep denial on the part of the toxin manufacturers.

A compelling and powerful investigative documentary, The People vs. Agent Orange is a shocking wake-up call that sheds light on environmental and human catastrophe that should not be missed.