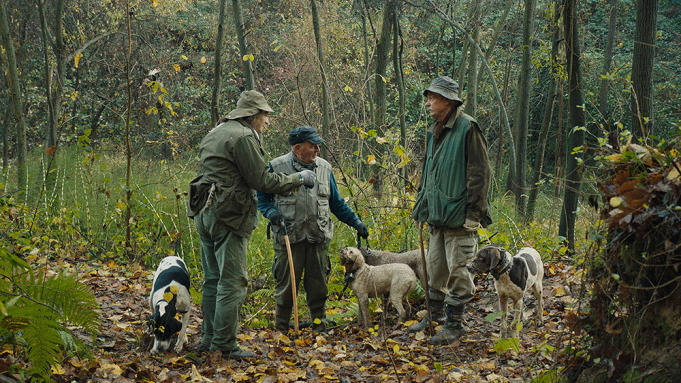 The Truffle Hunters provides glimpses into a secretive world.

The scrumptious, elusive truffle maintains its place as the food of legends world-wide. The fruiting body of edible fungi, they’re similar to mushrooms but grow underground near tree roots and thus defy easy discovery, prove difficult to grow as well as to store. For all their agricultural challenges, costs surpass thousands of dollars per pound for the best and rarest.

Among the two most desirable and celebrated are Italy’s white truffles and France’s black ones. Now, thanks to Michael Dweck and Gregory Kershaw’s documentary The Truffle Hunters, the door is slightly cracked open on northern Italy’s secretive world of nighttime quests for precious Alba truffles. Not that the filmmakers found themselves welcomed by the few solitary octogenarians who hunt by night in places known only to them, as Dweck and Kershaw explained in a discussion for this year’s on-line New York Film Festival when I first saw the film. In fact, these two spent more time building trust with the two central experts, 88-year-old Carlo and 84-year-old Aurelio, than it took to shoot the film, which they did themselves, both previously working as cinematographers.

All the hunters’ critical partnerships with their dogs immediately becomes apparent. Trained to respond to the pungent pheromone scent of the white truffle, Carlo’s Titina and Arelio’s Birba emerge as the real stars. Fitting the dogs with cameras that capture that point of view of the forest as the dogs track scents and signal prized finds, Kershaw explained that “we constructed the images to reflect the feeling of moving through this place that felt to us like a real-life fairytale.” Dweck explained further that “each image is deliberately framed and composed in a way that allows the action to unfold in front of the lens. That came from this place and the way it spoke to us. The light had to be perfect, so that took patience and time. Almost every scene in the film was covered with just one shot.”

As a result, viewers need patience, but it’s such a pleasure to settle into northern Italy’s Piedmont region, primarily three small villages. Moreover, getting to know these truly eccentric, fascinating men, their wives, their solitude, and their worlds is as rewarding as the truffles they hunt. In Italian with English subtitles, The Truffle Hunters is available through streaming platforms.