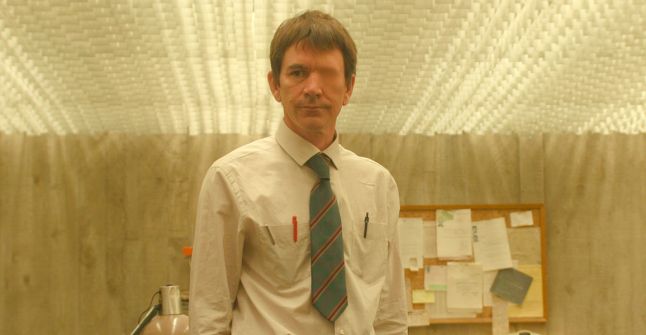 Experiencing the wildly inventive world of writer/director Quentin Dupieux’s Au poste!, translated as Keep an Eye Out, I had to abandon anticipated conventions of film comedy. And yet, laughing out loud, I happily embraced Dupieux’s surreal absurdity and creative storytelling produced on a miniscule $624,000 budget, set primarily in Chief Inspector Buron’s cluttered office, with only three main characters.

Here’s how and why it works. The first scene announces quite clearly that it’s time to forego logic, for over the opening titles a middle-aged man clad only in red briefs conducts an outdoor orchestra in an idyllic, tree-lined field. The police arrive and give chase as the formally attired orchestra continues to play. Cut to a police chief’s office where his radio plays that very music, after which the conductor is marched into the police station. But wait, he’s not the protagonist of the film and won’t be seen again. Cut to Commissaire Buron, feet up on his desk, on the phone, trying unsuccessfully at length to find a time for some meeting while the suspect he questions, Fugain, complains about his overwhelming hunger, a theme that will receive considerable, amusing development.

Spoofing the clichés of tension-filled police procedural cross examinations, Buron questions Fugain’s description of the seven overnight trips in and out of his apartment that led to his discovery of a corpse in a pool of blood. Buron wants to know, for example, how Fugain knew the man was dead. Had he ever seen a murder victim before? In the course of their exchanges, Fugain relives that evening with flash-forwards within his flashbacks. Also critical is one-eyed police rookie Philippe, his triangle shaped ruler, smoke that exits Buron’s chest as he enjoys his cigarettes, and a few other characters who briefly pop into the office.

No spoilers, but the last ten minutes are what the silent film genius Harold Lloyd would call the topper, but here Dupieux adds a second and a third topper, played straight with perfect composure. The droll acting by Benôit Poelvoorde, Grégoire Ludig, and Marc Fraize complements the tone and long takes. Running just over an hour, Keep an Eye Out delivered more laughs, cringes, and enjoyment per minute than I’ve felt in a long time. In French with English subtitles, Keep an Eye Out is available through a direct link to the Webster University film series website.