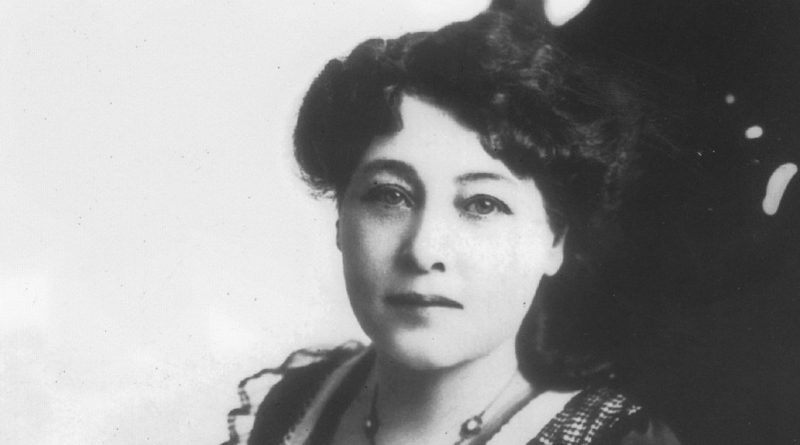 Guy-Blaché is credited with having made more than 1000 films during her 25 year career, but her productivity, proactivity and achievements were eclipsed by those of less laudatory male colleagues and her superb work fell into obscurity. Not until recently has her fascinating story been brought herstory to light. Our goal is to amplify the ongoing appreciation for Alice Guy-Blaché and her extraordinary legacy.

Guy-Blaché was born in Paris on July 1, 2873. During her early childhood, she moved back and forth several times between Paris and Santiago, Chile, where her father owned a small publishing house and bookstore. Her primary education was primarily at convent schools in France. In 1891, shortly after her father died, Guy-Blaché became a typist/stenographer to support herself and her mother. In 1894, she got a job at the ‘Comptoir général de la photographie,’ a camera manufacturing and photography supply then owned by Felix-Max Richard, but later purchased by an investment group that included Léon Gaumont who became general manager, and was a familiar name and famous influencer in early cinema history.

Working as Léon Gaumont’s secretary, Guy-Blaché became thoroughly familiar with L. Gaumont et Cie’s operations, marketing strategies, clients and network of filmmakers including the very forward-thinking and inventive Auguste and Louis Lumière. On March 22, 1895, she attended the Lumières’ moving image screening, the film pf workers leaving the Lumière factory in Lyon. Guy-Blaché saw the potential in using the new moving image projection technology to tell stories and asked Gaumont to allow her to try her hand at it. He agreed. Guy-Blaché’s filmmaking career began.

THE GAUMONT YEARS AND SOLAX

From 1896 to 1906, Guy-Blaché was Gaumont’s head of production. Her first film, the still charming La Fée aux Choux (The Cabbage Fairy), described in a July 30, 1896 newspaper as a “chaste fiction of children born under the cabbages in a wonderfully framed chromo landscape,” is considered to be the first narrative film ever made. During her tenure at Gaumont, she produced numerous dance and travel films, including her very popular serpentine dance films that were big music-hall attractions. In 1906, she made The Life of Christ, her biggest Gaumont movie, a massive production structured as 25 episodes and using 300 extras. In it, she pioneered the use of Gaumont’s “Chronophone” system to synch audio to the images on screen and she effectively introduced special effects such as running film backwards, and using double exposure and masking techniques.

In 1907, when she married Herbert Blaché, who also worked for Gaumont, Alice had to resign her position at the company. Blaché was subsequently named Gaumont’s United States production manager and relocated, with Alice, to Gaumont’s facilities in Cleveland, Ohio. In 1910, shortly after they transferred to New York, Guy-Blaché and Blaché partnered with George A. Magie to form The Solax Company, with production facilities in Flushing, New York. Guy-Blaché served as artistic director and actually helmed many of the company’s releases, while Blaché was production manager and principal cinematographer. Two years later they moved Solax to new and technologically advanced production facilities in Fort Lee, New Jersey, the early production hub for US cinema. The Solax Company was the largest and most successful pre-Hollywood cinema studio.

Cost effective and mild-weathered Hollywood was eclipsing Fort Lee as the prime location for movie production. In 1918, Herbert Blaché left Alice and their children to pursue a career in tinsel town. Alice continued to work on the East Coast. In October 1919, while filming Tarnished Reputations, she almost died from the Spanish flu pandemic. Tarnished Reputations turned out to be the last film Guy-Blaché directed. Following her illness, she joined her husband in Hollywood, but they lived separately, and she worked as his directing assistant on two films. Her finances were disastrous and in 1921, she had to declare bankruptcy and auction off her film studio and other possessions. After she and her husband were officially divorced in 1922, she returned to France. She never made another film. She and her accomplishments fell off moviemakers’ and moviegoers’ radar.

Guy-Blaché didn’t accept her inexplicable absence from the film industry’s historical record. She wanted her legacy recognized and preserved. She wanted credit for all that she’d done and constantly challenged and cajoled colleagues and film historians to correct inaccurate statements made about her life and work. She compiled lists that chronicled her productions that had been forgotten or excluded from the industry’s records. To set the record straight, Guy-Blaché wrote an autobiography in the late 1940s, but it wasn’t published until 1976 in French, and the English version wasn’t published until a decade later. By that time, she’d moved back to the US to live with her daughter in Wayne, New Jersey, and she’d passed away, at age 94, in 1968 — before being able to enjoy the renaissance of interest in her work and accolades for her accomplishments. It’s hard to measure the impact Alice Guy-Blaché had on the aesthetics and business of making movies. Guy-Blaché was one of the early women in cinema (along with Lois Weber) to manage and own her own studio, The Solax Company. In all, she’s credited with the direction of more than 1,000 films, some 150 of which survive, and 22 of which are feature-length — but few of these survive in a viewable format. Hopefully, with new technologies for film restoration and preservation, these can and will be formatted for current viewing. In December 2018 Kino Lorber released a six-disc box, Pioneers: First Women Filmmakers, made in cooperation with the Library of Congress, the British Film Institute and others. in which the first disc is devoted to Alice Guy-Blaché’s films, including Matrimony’s Speed Limit (1913) which was selected for preservation in the National Film Registry of the Library of Congress in 2003. More about her life can be learned from Pamela B. Green‘s excellent Be Natural: The Untold Story of Alice Guy-Blaché (2019). Everyone who loves movies and/or works in the movie industry owes a debt of gratitude to Alice Guy-Blaché. We celebrate herstory by shining the AWFJ SPOTLIGHT on Alice Guy-Blaché during Women’s History Month. — Jennifer Merin