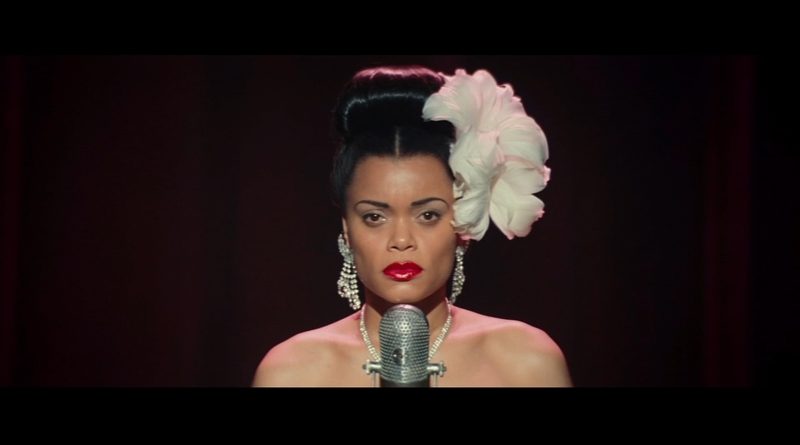 There was a lot of pain and conflict in Billie Holiday’s short life, all of it right there in the music.

That music is the saving grace of The United States vs. Billie Holiday, a new biopic about the legendary jazz singer that stars Andra Day and is directed by Lee Daniels, with a screenplay by Suzan-Lori Parks.

It’s an uneven and often melodramatic undertaking, suffering from what looks like an inability to leave anything out — people wander in and out of the story with no apparent purpose, leaving larger-than-life characters such as Tallulah Bankhead (Natasha Lyonne) and Lester Young (Tyler James Williams) with nothing much to do. It’s a crowded story.

That doesn’t mean it isn’t worth seeing. Every now and then Andra Day sings, and you’re left just sort of sitting around slack-jawed at her talent.

Billie Holiday was public enemy #1 to an agent named Harry Anslinger, head of the Federal Bureau of Narcotics.

Prohibition was over. Anslinger (played by Garrett Hedlund) had moved on to declare war on drugs, and in Billie Holiday he found the perfect target.

The storytelling framework of the United States vs. Billie Holiday is Anslinger’s relentless legal pursuit of the singer and his hope to have her put away for her drug use.

It was really Holiday’s stance on civil rights that made Anslinger see red; her rendition of Strange Fruit, that harrowing song about a lynching (written by Abel Meeropol) was seen as particularly dangerous.

Anslinger is portrayed here as almost obsessed with trying to prevent Holiday from ever performing Strange Fruit.

Lee Daniels’ film about Holiday covers that last decade of her life, starting out in the late ‘50s with a glimpse of her career in decline, and then flashing back to her performing at New York’s Cafe Society 10 years earlier.

Here is Holiday performing live, beautifully dressed and worshipped by the audience, and here she is nodding out on heroin in the toilet. The contrast between her powerhouse public performances and tortured personal life is duly noted; trouble is, when Day channels Lady Day and starts singing, everything else about the movie falls away.

Drug use lands Holiday in jail for a year, where she washes floors and does dishes. And doesn’t sing. Snow flies outside the window, showing time passing … a friend fills in the blanks of her terrible childhood and lonely life.

Her time inside leaves her clean of drugs but sobriety doesn’t last long. Holiday plays Carnegie Hall — a triumph — shortly after getting out of prison, and then it’s more avoiding the feds, more trouble, more drugs, more violent behaviour from the men she marries.

The United States vs. Billie Holiday won’t tell you anything new about Billie Holiday but it functions as lovely window dressing for Andra Day’s extraordinary singing talent.