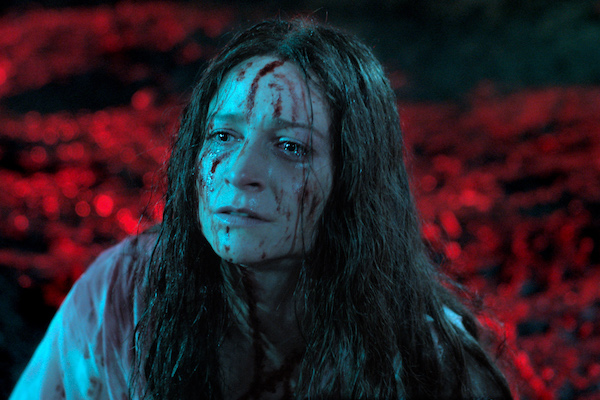 In and of itself, Censor is a brilliant, original and head-in-the-door-slammingly creepy horror film. That Censor is a debut feature makes it all the more extraordinary. With this film, Prano Bailey-Bond has made a film that while far from derivative offers the perfect bookend to a dream double bill with Peter Strickland’s Berberian Sound Studio, not only because both are cerebral horror movies set in specific historical moments of the genres history (70s Italian horror in Strickland’s case; the 80s video nasties moral panic in the case of Censor). Rather, Bailey-Bond’s film reaches that perfect crescendo where tone, theme and form collide with spectacular results, a quality Strickland himself has mastered as one of the great cinematic stylists and genre experimenters working today.

To be clear, this is not to reductively frame Bailey-Bond’s achievements merely in terms of how they compare to those of male filmmakers. That this is her feature debut risks overlooking just how hard she has worked to get to the point where Censor is today, having made its world premiere at Sundance earlier this year and now playing in the Panorama section of the Berlinale. The Welsh-born filmmaker who herself comes from an artistic family well and truly earned her stripes on the international festival circuit with her award-winning 2015 short Nasty. On the back of this and a number of her other shorts, she was selected for talent development schemes including the BFI Network@LFF and the Berlinale Talent Campus, and even before Censor’s release, she was named a “Star of Tomorrow” by Screen Daily, who can pat themselves on the back for so accurately predicting Bailey-Bond’s obvious and undeniable promise.

At the heart of Censor lies Enid (Niamh Algar), an almost prissy and visibly uptight bureaucrat who works 9-5 deciding what scenes to cut from a seemingly never-ending torrent of extreme film content, set during a period where the so-called Video Nasties moral panic put enormous pressure on censors to be the social barriers between corrupting screen media and Britain’s impressionable youth. The shadow of conservatism of Thatcher’s reign during this period is cast heavily over the film, its murky, lifeless color palette standing in striking contrast to the jewel-colour, delirious hues of the films she watches. But as professional as Enid tries to be, a deep childhood trauma – the disappearance of her sister – weighs upon her heavily, and believing she sees the adult version of her sister in one of the gruesome films she watches at work, Enid’s life takes an irreversible turn as fact and fiction begin to blur.

While Censor is aggressively historical in its style and context, the more sensorially overwhelming elements of the film – created largely via the extraordinary tension between the film styles of the movie itself and the clips we see from other films diagetically positioned within the film – find the experience of being sucked down to where these two cinematic worlds merge a dizzying one that stands outside of time, the very liminality of the film on this front a hat-tip of sorts to one of Bailey-Bond’s key influences, David Lynch. Yet while this influence can certainly be found in Censor’s experiential slipperiness, the film is thankfully never fanfic, and stands distinctly as the product of an original and unique directorial visionary. Far from retro-for-retro’s sake, there’s an eerie, almost indefinable sense of déjà vu to Censor that comes as much from its dark, disturbing textures and tones as its plot and characters; this one sinks right in, and it’s a stain hard to rub off.