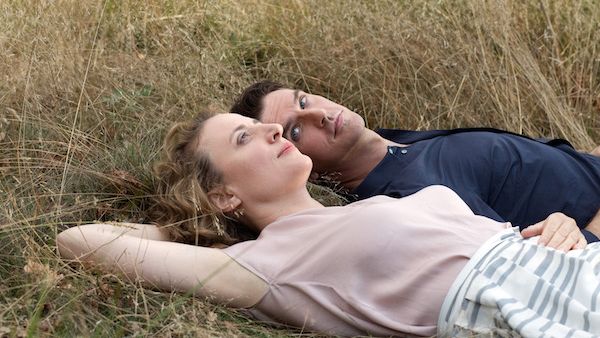 Everything on the surface of Maria Schrader’s I’m Your Man screams 1990s straight-to-video romcom and yet, somehow, it is so much more than that. I’m Your Man is a classic girl-meets-boy tale, except of course here that boy is a bot. And a German-speaking Dan Stevens shaped bot called Tom, at that. A dedicated anthropologist who has only grown more focused on her work since a recent break-up, Alma (Maren Eggert) is effectively blackmailed by her supervisor into participating in an unusual experiment for him to sign off on funding for an essential research trip necessary for the completion of her project.

And what an experiment it is: she is to spend three weeks living with a human-like robot designed solely to be her ideal companion, and who learns to adapt to her desires as they get to know each other, making him her supposed perfect life partner. While thoroughly disinterested in Tom and the project as a whole, Alma discovers that life can sometimes take us on unexpected paths, in unexpected directions.

Shifting to the director’s chair with her feature debut Love Life in 2007 from an award-winning career as an actor, Schrader reveals with confidence and ease that the skills she learned in front of the camera put her in good standing to know precisely what it takes to pull a movie of this calibre together in the director role. From Agnieszka Holland to Peter Greenaway, if this is where Schrader learned the ropes, then surely, she learned from some of the best.

Playing in the Competition section of the 71st Berlin International Film Festival, in the hands of another director I’m Your Man would risk being twee or even silly, but Stevens and Eggert play their characters just earnestly enough for it to avoid collapsing into camp pastiche. I’m Your Man is a curious film to consider in relationship to Sandra Wollner’s The Trouble with Being Born, which coincidentally premiered at the 2020 Berlinale, winning the Special Jury Award in the Encounters program but gaining notoriety internationally with its story of a girl-child android who (in the beginning of the film at least) lives with an adult man.

While tonally a world apart, these two very different films – by very different filmmakers – do at their heart share a fascination with the very questions about what makes us human. While Wollner fearlessly went for the jugular, Schrader’s far less controversial approach nevertheless does seem fundamentally concerned with many of the same questions. A fun movie with a perhaps surprisingly emotional punch, I’m Your Man is surely the high-tech feel-good romcom of the year.