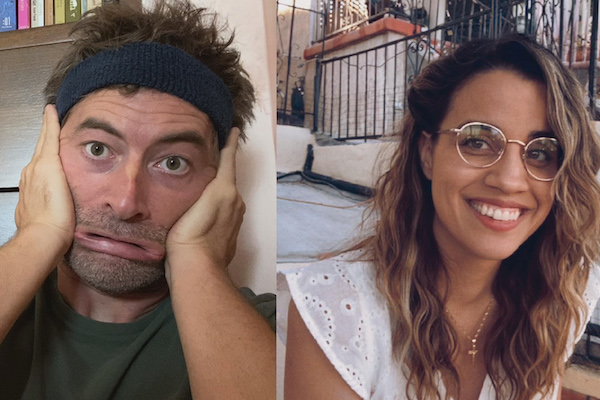 There is a gift to weaving autobiography into critical writing, and it is, to be frank, a skill I have not yet wholly feel I have mastered. But when a film like Language Lessons comes along, it is simply impossible to talk about it in any other way; this might sound perhaps like a pre-emptive defense for an indulgent review, but on this front I am unapologetic. I want to wear this film in a heart shaped locket around my neck, focused as it is on that far too precious and rare subject matter in cinema: deep, life-changing friendship between a man and a woman with no romantic or sexual elements on any level. Language Lessons reduces me to monosyllables; it is just pure and good and hard and kind and – ultimately – just so, so, so real.

In December 2020, I lost my best friend of almost two decades to cancer. Between the day he called me complaining in graphic detail about an upset tummy to the day I held his hand as he lay dead, surrounded by friends and family, it was less than 50 days. I downloaded the enormous volume of text messages on my phone and we averaged about 15-20 messages a day, and in his absence that has left me with a lot of time to think about a whole world of things.

One of them – one that niggled – is one that Language Lessons answered directly: why don’t I see films about friendships like the one I had with my late friend on film, just because he is a man and I am a woman? Why must these relationships always have a romantic or sexual element when my own lived experience says this is far from the reality of real friendship? Language Lessons may not be the first film to do this, but for me, the timing couldn’t have been more perfect. I needed this film, and I needed it now: it validated a kind of friendship that, compared to same-sex friendship movies, are almost invisible.

Based on a screenplay co-written by Natalie Morales and Mark Duplass, the origins of the project stemmed from the latter’s experience of trying to learn Spanish during lockdown, his relationship with his teacher inspiring an idea he took to Morales – that which he has described in press for the film as a “platonic love story”. Fascinated by the idea of making a romcom with the “rom” component reimagined in an entirely different way, Morales leapt on the idea and the two quickly got to work, which she directed and in which they both co-star.

While only mere months into 2021, the suffocating restrictions of COVID-related lockdown restrictions that paralyzed the film industry has already inspired the creation of some extraordinarily creative films, ranging in their diversity from Rob Savage’s edge-of-your-seat horror film Host to, more recently, Sam Levinson’s Malcolm & Marie. While not every film made in these conditions will be able to meet this same high standard, we can comfortably add Natalie Morales’s directorial effort Language Lessons to the list of those that hit a creative high while the world was suffering a much broader low.

Kept largely under wraps, shot quickly and with a minimal crew, the dual-language Spanish and English film follows. Cariño (Morales) and Adam (Duplass), after Adam’s husband Will (Adam Desean) surprises his spouse with 100 online Spanish lessons via Zoom. Cariño teaches from her simple apartment in Costa Rica while Adam lives in an opulent mansion in Oakland, but despite their differences they hit it off almost immediately (the film is worth it for only teaching us the Spanish word for ‘mansplaining’ in its opening moments). A sudden, catastrophic trauma throws Adam’s life into chaos, however, and while he is barely able to get out of bed – let alone continue his Spanish lessons – Cariño perseveres, and a deep friendship blossoms. When the tables are turned and Cariño is the one in trouble, the strength of this fledgling yet intense relationship comes under enormous pressure, facing both Adam himself and we the audience to question the real value of this relationship.

With its world premiere in the Berlinale Special section of the 71st Berlin International Film Festival, the off-camera friendship between Morales and Duplass is largely what carries the film, alongside their obviously highly developed skill set as both performers and writers. Morales directs with a deft, elegant hand, rendering the carefully structured film made up of a series of “lessons” (grammar, context, etc.) into something entirely cohesive and unrelentingly engaging: the film flies by pace wise, with no moment to stop and check the clock. But the real power of Language Lessons is precisely just how well it works as a “platonic love story” – together, these friends behind the scenes accomplished precisely what it was that they set out to do, and they couldn’t have done it better if they tried.