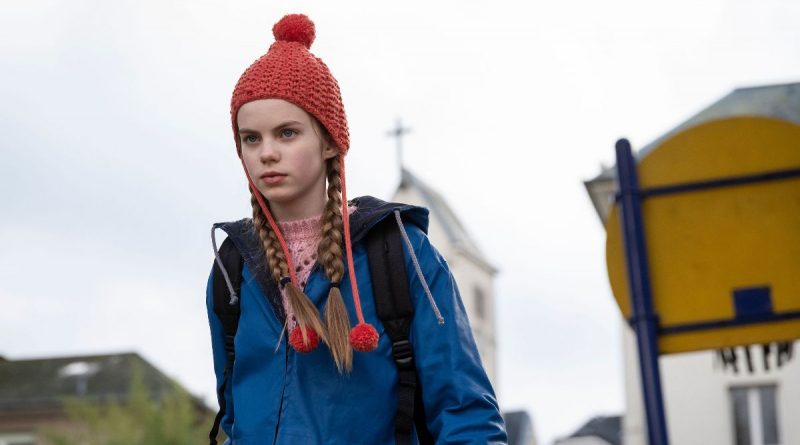 With its world premiere in the 2021 Berlinale’s Generation Kplus section, writer and director Barbara Kronenbgerg’s Mission Ulja Funk is a lollipop-colored kids road movie that centres around 12 year-old Ulja (Romy Lou Janinhoff) of the film’s title, a science nerd of Russian heritage who lives in a little German village with her family. With her rational mind and hunger for knowledge, her scientific vision and diminished role in the family hierarchy see her devoutly religious grandmother Olga (Hildegard Schroedter) forbid Ulja from continuing her extra curriculum research in the field.

The timing could not be worse, because Ulja because she has just confirmed an asteroid is hurtling towards Belarus, destined to arrive in mere days. Taking destiny in her own hands, she convinces a boy from school to drive her to Belarus across Poland, with Ulja’s grandmother accidentally trapped in the back of their stolen hearse. In hot pursuit is her family’s Church community – including the anti-science pastor himself – in a crowded mini-bus as they travel across Europe.

The leaving behind of one life to actively pursue a passion for another finds a tidy parallel perhaps in filmmaker Kronenberg’s own career, beginning as a software developer but throwing it all away to pursue her passion for making movies, resulting in this, her feature debut. Driven by a desire to celebrate the titular Ulja’s absolute determination to follow her passions, Kronenberg wanted to build a character who was in some way detached from the more Earth-bound realities of those around her, and more connected to her interest in astronomy.

Playfully teasing out the tensions between faith and science, old and young, Mission Ulja Funk is by no means a movie that reinvents the wheel, but it absolutely has no intention of doing so. Fresh, joyful, and never patronizing the complex, fearless protagonist, Mission Ulja Funk feels like one of those movies for which it feels the phrase “for the young and young at heart” was invented.