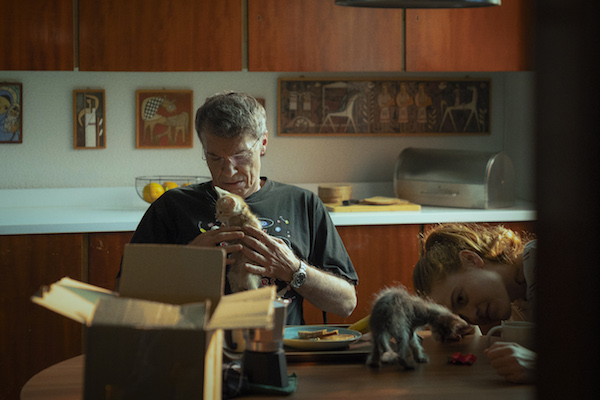 Some films, on paper, aren’t much; that is why, without wishing to sound facetious, they aren’t novels. Premiering in the Encounters section of the 2021 Berlinale, Greek filmmaker Jacqueline Lentzou’s Moon, 66 Questions is a masterclass in precisely what makes this axiom so true. While all the elements are there that independently tick the boxes of what makes a “good film” – complex characters, compelling plot, etc. – what this all misses is that driving like a freight train through the core of this film from its opening to closing moments is an emotional intelligence and sensitivity that is communicated sensorially as much as it is through the Big Words or Big Actions that we critics in our laziest moments so desperately cling to.

The film allows us a precious glimpse for a brief moment of time into the life of a young woman called Artemis, played by director/screenwriter Lentzou’s frequent collaborator, Sofia Kokkali. When her estranged father Paris (Lazaros Georgakopoulos) is struck down by a debilitating autoimmune disease, Artemis must return home to care for him in the most intimate and attentive ways possible as he struggles to gain the ability to speak and walk through an aggressive rehabilitation programme that puts an enormous strain on them both.

Juggling her complicated feelings towards a man whom she feels a great distance from with her simple desire to be a young person who lives a life doing young person, through Kokkali’s sincere, nuanced performance in particular what might in the hands of another filmmaker feel like a pretty standard family drama becomes something altogether more sophisticated and deeply, deeply moving.

The world in which Paris and Artemis inhabit could almost be mistaken for ordinary at times, but Lentzou’s striking creative decisions render the film anything but; opening and punctuated throughout with images of Paris’s home movies from the late 1990s with Artemis’s voiceover revealing her inner thoughts, the contrast of perspectives and formal articulation of where each character is focused provides a way of measuring where father and daughter have strayed and intersected throughout their relationship.

A scene early in the film defamiliarizes Artemis’s arrival back in Paris’s house, feeling like it is being shown first person through a goldfish bowl-like astronaut’s helmet, maintaining the mise en scene of quotidian domesticity but looking anything like the everyday. Similarly, the way that mouldy bread, discarded food containers and the like are shot in single, simple takes make them feel almost cosmically unfamiliar in nature; that enigmatic title does a lot of heavy lifting even in the film’s earliest moments in reframing how we see the everyday, even making the way we watch Paris learning to walk again seem somehow unspokenly tethered to movement in a gravity-less space.

Astrology plays as much a role in the film as these subtle nods to astronomy, however, and the structural device of still images of tarot cards communicates wordlessly the overwhelming, silent presence of fate and destiny in the movie. This provides the larger, more abstract backdrop against which Artemis’s tale is told – a coming of age film of sorts, yet there is not feeling here of a movement from point A to a wholly resolved point B. Rather, these are stops along the way, turned tarot cards which when be read together collectively provide a portrait of a young woman discovering things about herself through the discovery of her father’s own most fiercely protected secret. The tidal currents of Moon, 66 Questions gently pull us out into an ocean of captivating gaps, ellipses and silences, granting an enormously rich emotional rich experience for those willing to go with its flow.