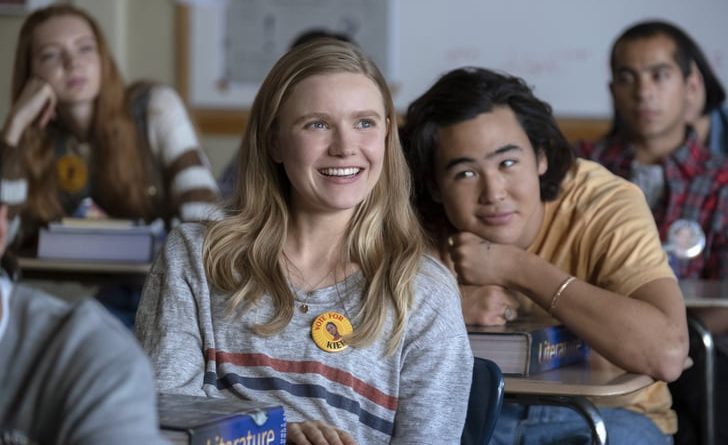 Well, in this day and age, never would I think that a teen-aimed movie would cause me to Google how many R’s are in riot grrrl. But leave it to Amy Poehler to introduce a rage-filled femme-forward music movement spin-off of punk from the ‘90s to the Covid-19 generation. In Moxie, whose script is based on a YA novel, she shows up both in front of the camera as a semi-cool mom of an introverted high-schooler and behind it as it director. But the focus is on Hadley Robinson as her daughter Vivian, who is trying to define herself while facing the task of writing a college essay.

After her first day of her junior year, she is increasingly disheartened by the tradition of ranking female students each year on social media with such demeaning labels as “Best Rack” and “Most Bangable.” But when a Hispanic new girl named Lucy (Alycia Pascual-Pena) takes umbrage that the summer reading assignment for her English class is that literary moldy oldie The Great Gatsby a tale that focuses on a rich white dude. On top of that, she has the balls to stand up to the cocky star football player Mitchell (Patrick Schwarzenegger) after he spits into her can of soda. When Lucy reports his conduct to the principal (Marcia Gay Harden), she says she must not suggest that he “harassed” her and to just give him a pass.

Seeing Lucy stand up for herself awakens something in Vivian. She and her best buddy, Claudia (Lauren Tsai), are not ones to seek attention. but she realizes that she might learn something from mom’s youthful obsessions with rage-filled all-girl bands like Bikini Kill and does some research into philosophizing fan ‘zines and decides to emulate them with one of her own that she dubs Moxie and leaves a pile of copies in the ladies room at school.

Hiding behind her anonymity, Vivian takes on her school’s sexist practices including that of the administrators who look the other way. As for Lucy, she sees the ‘zine as an outlet for her own protests. Others include female athletes whose contributions to the school’s championship soccer team go mostly unsung. A chesty girl is called out of class for sporting a tank top while males get away with shirts that reveal their bulging muscles. And a trans student is denied to audition for the role of Audrey in the musical Little Shop of Horrors.

Vivian is allowed to have a love interest. He’s a childhood acquaintance named Seth, a skateboarder who finally had a growth spurt over the summer emerged as a hunk. He is sweetly played by Nico Hiraga from Booksmart and is a supporter of the Moxie movement.

The movie does have its moment of mild humor – such as when Seth finally meets Vivian’s mom and conveniently brings her favorite ice cream, which Vivian just took out of their own fridge. But the plot is mostly propelled by social issues. As a leading lady who finally comes out of her shell at the end, Robinson has some of the dewy blond freshness of a young Jason Jennifer Leigh in Fast Times at Ridgemont High. But Moxie is no way quite as fun as that adolescent classic and lacks any true sense of punk anarchy while taking down the system.