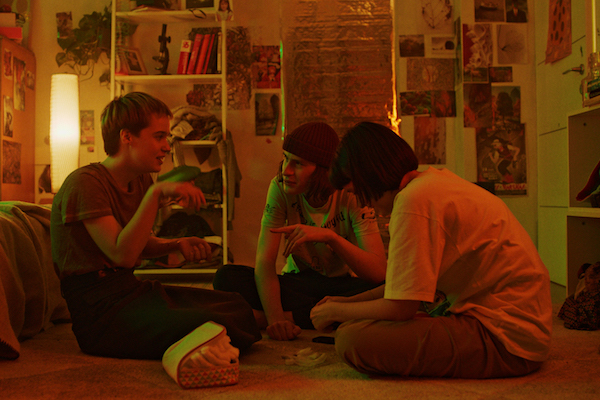 The dizzying liminality of adolescence is not exactly radically new terrain when it comes to coming of age movies, but with Stop-Zemlia, director Kateryna Gornostai’s debut fictional feature film turns it up to eleven in her documentary-imbued portrait of the kids of Class 11a at a seemingly generic Ukrainian high school.

With its world premiere at the 2021 Berlinale in the Generations section, Stop-Zemlia follows Masha (Maria Fedorchenko), a self-identifying weirdo who finds kindred spirits in Yana (Yana Isaienko) and superficial bad boy but total sweetheart Senia (Arsenii Markov). Gornostai’s background in documentary filmmaking serves the film well, avoiding cliche altogether as Masha and her friends face challenges about emotions, relationships, mental health, sexual identity, many of which they discuss in interviews to-camera with whom we assume is the director herself. But even beyond these interview scenes, there’s an objective matter-of-factness to Gorostai’s position as a storyteller that reflects an enormous amount of respect for both her characters and the young people who play them, which feels particularly poignant considering how far too often teenage girls and their stories are told in ways spanning from reductive to patronizing.

In Stop-Zemila, there is no risk of the film being accused of either of these things. Inspired by the filmmaker’s own life at the time, Gornostai’s recollections of her 16-year-old self fuel the sense of weightiness and seriousness of Masha’s story and that of her friends. In the context of films made for young audiences especially, this feels like a consciously flagrant rejection of the fluffy cliches that have fuelled a seemingly endless stream of perky teen movies; Gornostai here instead looks much deeper into the experience, her own memories personally driving her to get to a more profound exploration of this transformative moment. Importantly, however, the film is far from simply autobiographical, and if there is a broader documentary vibe to the film it is for good reason; Gornostai’s background in documentary led her and her team to interview over 200 adolescents, encouraging them to bring their own lived, contemporary experience to the representation of Masha and her friends.

Using her screenplay as a basis for largely improvised performances, the urgency and immediacy of Stop-Zemlia is electrifying and – like Gornostai’s earlier non-fictional work – seeks to find a real truth, even in the telling of a largely fictional tale. Stop-Zemlia is an intelligent film about a demographic who are so often approached by adult filmmakers in ways that miss all the nuance, fragility and genuine joy that this film brings to life.