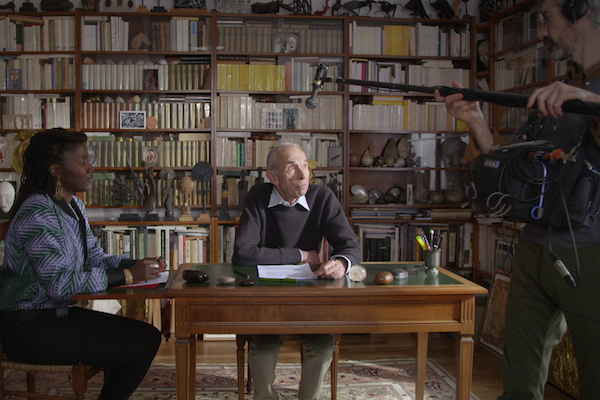 A French documentary filmmaker of Senegalese heritage, Alice Diop’s sociological sensibility and undisguised interest in French cultural and social politics has permeated work that saw her win a Cesar Award in 2017 for her short documentary, Towards Tenderness (Vers tendresse). With its world premiere at the 2021 Berlinale Encounters section, the simplicity of the title of her latest documentary We (Nous) suggests the looking glass nature of her project, focused as it is on using a busy French trainline as the literal and symbolic vehicle to profile a range of the city’s people, a meditative collection of individuals who seem disconnected but who ultimately come together under that elegant, simple banner: “we”.

Amplifying the diversity of Paris itself – of which her own background is a testament to – Diop’s project was sparked by the book Roissy Express: A Journey Through the Paris Suburbs (Les Passagers du Roissy Express) written by François Maspero and published in 1994. Here, he notes that this particular train line travels through a range of areas with strikingly different social and cultural demographics – so struck by the descriptions of the people portrayed in the book that the sight of one girl gave Diop a moment to pause and wonder if it was indeed a photo of herself. This perhaps led to the very conscious decision to include herself and her own family in the film’s “we”, most overtly through the inclusion of home video from her family.

Placing herself and her family’s story amongst the broader one of the city itself, Diop uses the film to expand her focus, encompassing a wide variety of subjects who appear next to each other almost like snap shots in a family album, individual vignettes that together offer a much broader story of “we”.

Bookended by the bourgeoise indulging in a stag hunt, We tethers itself to its central trainline as we meet a range of different people, all with different stories; widows recalling how they met their spouses, children playing with cardboard mats and sliding down dirt hills, and a famous writer who Diop interviews on camera, his journal providing them a way of articulating the literary and cultural heritage of Diop’s We project itself.

Together, these snapshots unite to build a bigger picture, the very “we” of the film’s title. A sociological travelogue of the heart and history of the French people themselves, Diop’s genuine affection and connection with her subjects make this ambitious project look almost easy.