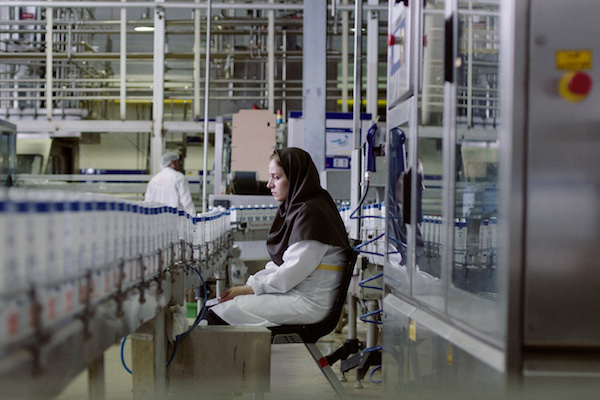 Written and directed by Behtash Sanaeeha and Maryam Moghaddam and starring Moghaddam herself as the lead character Mina, Ballad of a White Cow is a shattering tale of injustice, guilt, betrayal and survival. Playing in competition at the 2021 Berlinale, the film begins as Mina find out that her beloved husband Babak was executed for a crime he did not commit, leaving her a struggling widow raising their Deaf daughter by herself as she struggles with Babak’s father who wants custody of the child. Responding to her grief and shock at the news of her husband’s innocence with bureaucratic ambivalence, despite offering her money to supposedly atone for the injustice, Mina wants more. A new friend, Reza (Alireza Sanifar), enters the picture, helping Mina while hiding his own devastating secret.

For Sanaeeha and Moghaddam, Mina’s story and her fight for justice are representative of the real experiences of many Iranians, and the film was largely inspired by their stories. The filmmakers interviewed a number of people in developing their project, and just anecdotally Mina’s predicament reflected the lived experience of many people they knew in real life. In bringing Mina to life, Moghaddam both in front and behind the camera saw her as a way of representing the misogyny that women like her endure, a plight – like being a struggling single mother – hardly specific to the film’s Iranian context. It is that context, however, that strongly marks the film, its very title referring to a parable from the Quran.

Ballad of a White Cow is an uncomfortable, sad film where hope sits in frequently complicated tension with a sense of inevitability that things are destined to get worse once the truth about Reza comes to light. But it is also an unmissable film, a powerful film and an important film. Ballad of a White Cow does not flinch – not once – in its exposé of how a great injustice cannot be magically fixed by bureaucrats; rather, its trauma spirals outwards, endlessly and unnecessarily, ruining the lives of all it touches.