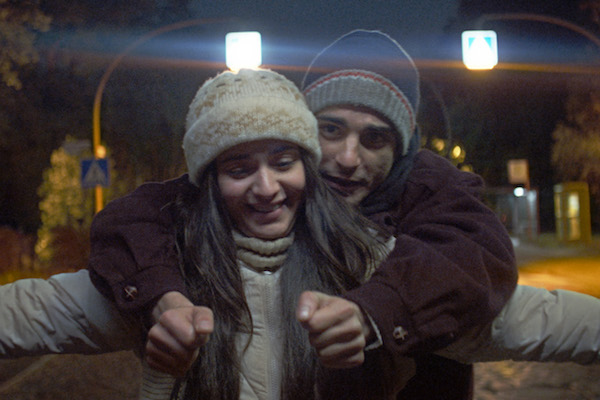 The story of the al-Qaeda suicide hijackers has been a subject of fascination in the wake of 9/11 for understandable reasons, their radicalization leading to the horrific attacks that not only scorched themselves on the personal and cultural psyche of those in the United States especially, but left a legacy of war, sanctions and policy shifts with so long a tail that its repercussions are still clearly felt today.

German filmmaker Anne Zohra Berrached approaches this story – inspired by actual events, but not explicitly based on them – from an entirely new angle in Copilot, a love story between two young Muslim students Asli (Canan Kir) and Saeed (Roger Azar) living in Germany in the mid-1990s. Hot, heavy and horny at times, their passionate relationship is overshadowed by Asli’s mother’s undisguised racism against Saeed, tormenting Asli and threatening their relationship until Asli decides to marry Saeed in secret. But problems only to continue to burden the young woman; she is left heartbroken when Saeed vanishes for an extended period of time after clearly keeping secrets from her about his shady new friends and mysterious trips abroad. Time and time again she relents, until – eventually – it is too late. The damage has been done.

The title “copilot” refers to a playful in-joke between the young lovers, beginning with Saeed’s dreams of learning to fly a plane which he eventually achieves after taking lessons in Florida, taking Asli along with him to fulfil the role of literal copilot on top of the more metaphorical reading of the role; as his wife, she supports him as much as she can and as much as he will let her. The shadow that looms over the title, however, is implied throughout (foreshadowed in the film’s opening moments), becoming explicit in the film’s final powerful scenes which results in one of the most elegant and extraordinary ending shots of any film this year thus far, showing Asli in an elevator.

Playing in the 2021 Berlinale Panorama section, Berrached constructs a powerful, moving love story where politics hovers inescapably around the edges as young love struggles against a number of external factors to find a way through together. The electricity between her two leads – Kir and Azar – largely grants the film its emotional core, and while their individual performances are admirable, it is the many scenes in which they appear together that light up the screen. Copilot is a captivating political love story, where all that is pure and good lies in precarious tension with a world gone mad.