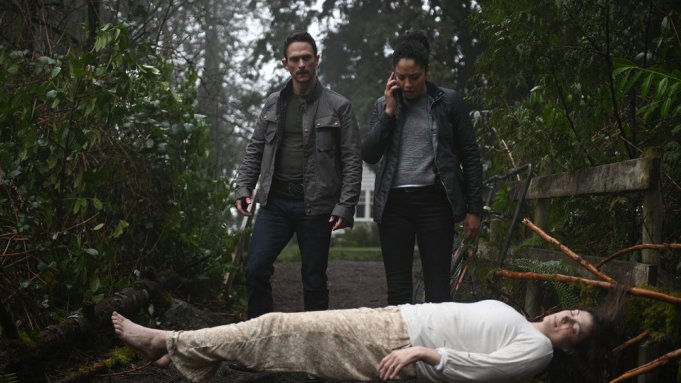 As an avid sci-fi fan, I was eagerly anticipating J.H. Wyman’s new NBC-TV Monday night drama Debris, which looks like an amalgam of X-Files, Lost and Fringe, Wyman’s previous show.

Set in the near future, it focuses on an international team of spies and scientists who examine mysterious material that fell to Earth after the destruction of an alien spacecraft.

Unfortunately, the pilot episode – which should be so compelling that you immediately want to stream the series – left much to be desired.

It opens high in a Manhattan hotel, where some obviously shady characters are negotiating for what looks like a metal chip. When government agents interrupt the deal, the mysterious object winds up on a housekeeper’s cart, dropping her 14 floors to her death in the ballroom far below.

Jonathan Tucker (Westworld) and Riann Steele (The Magicians) co-star as Bryan Beneventi and Finola Jones, a CIA agent and his MI6 counterpart. A physicist, Jones is the daughter of the renowned astrophysicist who first identified the shards as coming from an alien intelligence.

Shortly after, Bryan and Finola are summoned to Kansas, where the body of a woman is levitating in a field. One floating body leads to another, and soon Finola sees a vision of her recently-deceased mother.

Apparently, the woman in the field is grieving over the death of her young son, Kieran Vandeberg, who died in an automobile accident years ago. But now he appears not only to her but also to others whom he guides to their demise. So Bryan and Finola enlist the help of Kieran’ older sister Isla (Alisha Newton).

Problem is: unlike X-Files Mulder & Scully, Bryan & Finola have zero chemistry, let alone charisma. They’re bland, and the procedural format is too familiar.

“I believe this technology, if understood properly, can end famine, cure sickness,” Fiona declares. “I think what we’re doing here will absolutely change to course of humanity.” We’ll see.

On the Granger Gauge of 1 to 10, Debris is an eerie, fragmented 4. To stream or skip it? That’s the question.