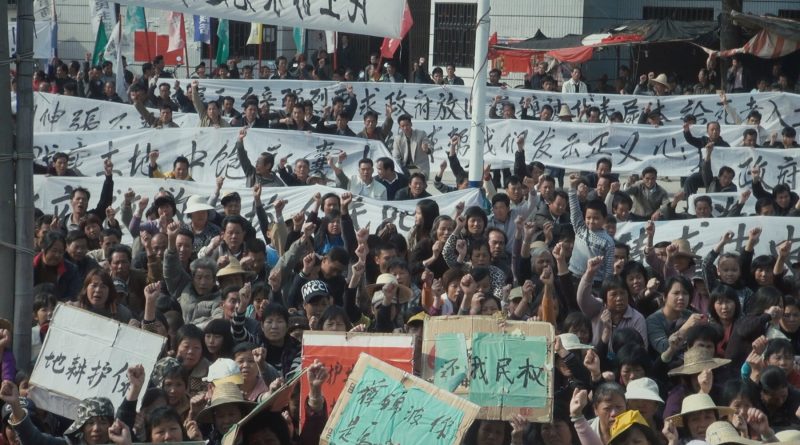 Lost Course is long form journalism edited into a riveting subtitled documentary which also boasts a thriller-like narrative. And is, perhaps, the most embedded of interactive citizen reporting ever seen to date. And to wit, nothing is as universal as seeing how rich and connected people take advantage of illiterate poor people, whether it is in China or anywhere else on the planet. This film reveals human nature and the deadly sin of greed is laid bare at its worst.

We are watching a videotaped expose of a village in southern China where Wukan residents were being stolen from. Corrupt Communist bureaucrats and politicians and rich developers literally stole the land from under their feet. In a fastidiously stitched three hour documentary, filmmaker Jill Li is a fly on the wall, an interviewer, a recorder of human rights violations and a mother confessor to people initially buoyed by their shared grievances and united to fight. Only to eventually be ground up by the system. Li is aided by brilliant editing by Luke To and Lau Sze Wai.

Li’s two-part political documentary (Protests, After Protests) is pure investigative journalism, the kind that takes years and dedication that most filmmakers do not invest in. It’s a familiar story, made more poignant by the ending footage of one protester named Hong who came to New York to share the Wukan story and tragedy with the West. Parked outside Donald Trump’s Tower the year he became the 45th US president, these intrepid Chinese whistleblowers from Wukan met with feigned interest.

Poor and working class villagers in the small fishing port of Wukan in China’s Guangdong province were pushed to their limits by shady developers enabled by corrupt officials. It all came to a head in September 2011 when they organized, took over their town and dared a general strike. If you are a student of Chinese history or have any awareness of how the Communist Chinese deal with dissidents or internal problems, you know that it does not end well for the protesters.

The general strike made world headlines. Li was based in Hong Kong and managed to get to Wukan to record the organizing, the protests and marches and the key players many of whom suffered detention or worse.

The film introduces us to many characters. And as documentaries go, there is a sobering effect on the soul after seeing that the universal crush on everyday people from the monied and the government bureaucracy has never fully — nor likely will ever — be resolved.

The film is a very long watch, and this is not effervescent entertainment. It should be incorporated into the national curriculum to show that despite Communism, the Chinese are as craven as any western capitalists when it comes to the almighty dollar/yuan.

Lost Course is an exceptional look inside a system few of us will ever see up close, and Jill Li’s dedicated interest in understanding and showcasing how corrupted systems close in around unsophisticated and unaware people minding their own business is chilling. It can happen anywhere. It happens everywhere. And it should make you mad as hell.