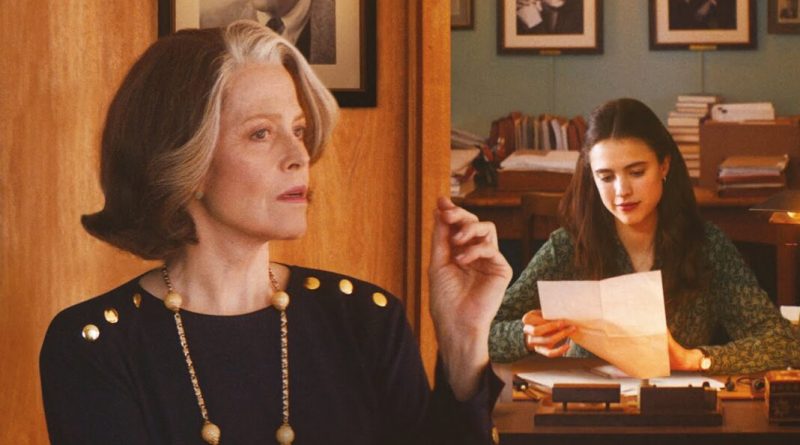 Based on Joanna Rakoff’s book of the same title, My Salinger Year revolves around bright-eyed Joanna (Margaret Qualley), who first fell in love with NYC when her father took her to sip tea and people watch at the Plaza and Waldorf Astoria. So much more interesting than folks in the her nearby suburban home. Joanna decides to take a break from both school and her boyfriend to live the dream of sharing a dumpy apartment and sitting in cafes writing.

Though fledgling poet Joanna winds up studying at Berkeley, on a holiday visit to NYC–where her best girlfriend is living–Joanna decides to take a break from both school and her boyfriend to live the dream of sharing a dumpy apartment and sitting in cafes writing. Of course, that still requires getting a job and the best skill in her set is that she can type; still, a gig at a well-known literary agency doesn’t sound bad… proximity to her aspirations, at least. Her new boss, Margaret (Sigourney Weaver), is prickly and fiercely protective of her star client, J.D. Salinger–Jerry, she says–and has little interest in engaging with the help, less in encouraging aspiring writers, whom she opines make “the worst assistants.” As far as she’s concerned, Joanna’s best quality is that she can type on a real typewriter. Computers “just make more work for everyone, wasting time,” she opines, and the only reason the agency has one is so interns can scour the web for people posting the work posting Salinger material.

Margaret also disapproves of t-shirts, sweatshirts (especially the kind with hoods), dungarees and open-toed shoes… but allows that it’s okay to wear trousers and stockings aren’t mandatory in summer. The hours are long, Margaret warns, and oh, yes, they have to talk about Jerry–whom Joanna has no doubt heard “many terrible things” about him and they’re all untrue. Salinger fans, on the other hand… they inundate the office with letters. “I guess you can start after Christmas,” Margaret says wearily, and oh yes–Joanna’s job with be to answer Salinger’s fan mail [there are sample replies for different types that must be followed precisely] on no account is Joanno to ever, ever give out his contact information. The fact that The Catcher in the Rye superfan Mark David Chapman killed John Lennon (he was carrying a copy when he did it) is part of the reason, the rest Salinger’s own desire to be left alone. The irony, if you can call it that, is that Joanna has never read Catcher in the Rye or, far that matter, anything at all by Salinger; she likes “difficult, gritty fiction” and presumes Salinger’s work to be precious and slight.

The trouble with My Salinger Year isn’t that it’s a terrible movie–it’s not. It’s that its version of Joanna Rakoff (who’s one of the executive producers), is so profoundly uninteresting; earnest, naïve, bright without being especially perceptive and untested by the kind of experiences that fiction writers use to force such unformed characters to develop. The inevitable result is that Weaver’s Margaret steals every scene she’s in–you can’t help but wish for a whole lot more of her steely boss, plus more of the film’s brief inserts of letter writers–identified by descriptors like “Boy From Winston Salem,” “Grieving Woman,” “Veteran” and “Girl Who Wants an A”–speaking words they hoped Salinger might read. In fact, my takeaway was a desire to read a book of Salinger’s fan mail.