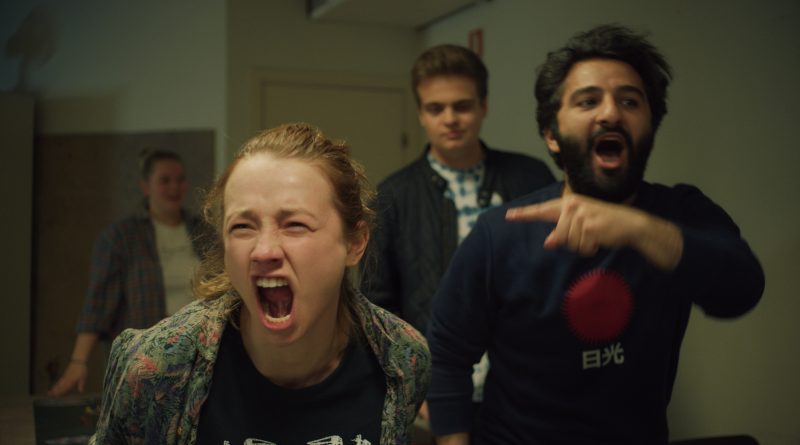 Based on Inga H Sætre’s graphic novel Fallteknikk – which somewhat charmingly translates literally to Fail Technician, Norwegian filmmaker Yngvild Sve Flikke’s Ninjababy takes the narrative nuts and bolts from the most banal after school special and turns it into something unambiguously magical. Watching Ninjababy’s central protagonist Rakel (Kristine Kujath Thorp) chaotically negotiate her way through a series of events (some the results of poor decision making and some just bad luck), the tale of this young party girl with little time to think about consequences hurtled me into a full-bodied sense memory of myself at that age; all the dumb stuff I did, the arrogance with which I did it, and that constant, near ambient half-hungover state that seemed to loom over it all, my spirit saved only by good friends who put up with more than they probably should have.

Rakel likes to drink, likes to take pills and mushrooms, likes to party and loves having sex which many self-respecting 23-year-olds (or once-were-23-year-olds) should thoroughly respect. The spanner in the works is that – oh oh – she finds herself pregnant and, bumping into Mos (Nader Khademi) the one-night stand whom her math indicates the father must be (he smells like butter and she did the maths), she is almost taken aback by what a lovely guy he is.

Accompanying her to the hospital to get the pregnancy terminated, Mos and Rakel are both surprised to learn that rather than sitting just under 12 weeks, Rakel is in fact closer to 7 months of her pregnancy, and just hasn’t shown. The stealth nature of her until-now unknown pregnancy leads her to christen the unborn child “Ninjababy”, and – through her gorgeous drawings that literally animate the film throughout – the baby via voiceover and Rakel begin a heated, ongoing debate about what the young woman should do.

The ninjababy is not shy, and neither is Rakel; one thing they both share in common, however, is undisguised derision for the man who Rakel realizes actually is the biological father, another one-night stand she and her friends have hilariously nicknamed “Dick Jesus” (she only discovers his real name when they begin discussing custody).

Working through what her options are, Rakel is forced to ask a series of questions regarding what she should do and where, ultimately, her heart lies for both the men in her life and her ambitions for herself and vision of her own future. Playing in the Generation 14plus section of the 2021 Berlinale, Ninjababy’s story is uncouth, touching, and laugh-out-loud funny, a high-energy and thoroughly unladylike tale of unexpected, unwanted pregnancy and the surprising paths it can lead you down.