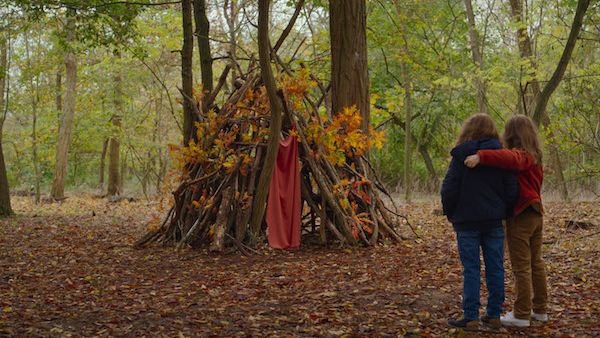 Speculation has been running high since Céline Sciamma’s 2019 film Portrait of a Lady on Fire about where the French filmmaker would go from there; what, precisely, can one do to top something so immaculately crafted, perfectly structured, and which carried the impact of a sledgehammer to even the toughest, most unmovable hearts? With its world premiere at the 2021 Berlinale where it is in competition, Petite Maman provides a satisfying answer.

Any attempt to draw comparisons between the two films is futile; they are very different, although clearly the product of the same creative visionary in their focus on unconventional love stories. While in Portrait of a Lady on Fire, this took the shape of a passionate romance between two women, here we have something altogether different: the love between a mother and her daughter.

The plot is elegantly simple. Nelly (Joséphine Sanz) Is eight years old, and is sad she didn’t get to say a proper goodbye to her beloved grandmother. With her mother Marion (Nina Meurisse) and her Dad (Stéphane Varupenne), they must pack up her grandmother’s things in the care home she died in, and then do the same to the house she left behind – the same house where Marion herself grew up. Understandably internalizing much of her pain, Marion is regardless a caring, supportive mother, but clearly, she is struggling. Unable to tolerate being in the house any longer, Marion leaves, with Nelly awakening to find her mother gone and she and her father in charge of wrapping up the final details of emptying her grandmother’s house. Going out to play in the beautiful woods that surround the house, Nelly finds a girl her own age building a fantastic hut out of fallen branches. Played by Sanz’s twin sister Gabrielle, this little girl’s name is Marion.

The title Petite Maman – Little Mom – is hardly a complex one, but its simplicity points precisely to the core of what it is that makes the relationship between the two characters played by the Sanz sisters so moving. At first, neither seems particularly struck by their similar appearance, and Nelly is calmly accepting of the fact that her new friend is in fact her mother as a child in that sweet, funny way that kids so often just take stuff on board and sit with it. Despite the science fiction sounding premise, the film gently nudges us to look in a different direction, rejecting the idea of time travel over what is simply stated as taking another path – Little Marion and Nelly live in identical homes, one with Marion and her mother living in it, and an older one which Nelly and her father continue to empty out.

Rather than distracting us with genre’s sleight of hand, then, Sciamma is far more interested in using the relationship between the two children to create a basis for both Nelly and we the audience to reconsider the relationship between Nelly and her own mother (and, in turn, the adult Marion’s relationship to her recently departed mother, Nelly’s grandmother). This is a soft, autumnal film that radiates sensory energy everywhere it can – the digging in the soft dirt for acorns, the taste of freshly made cocoa with milk poured from a saucepan, the heavy feeling of a wet woolly sweater being removed of a child’s body after being caught in the rain.

At its most successful, it reminds the body – as much as the brain – what grief feels like, too. Petite Maman is what children of Nelly and her little mom might call a “big feelings film”, but its focus on the minutia of childhood provides an eloquent, emotional balance, making this yet another Sciamma treasure for us to contemplate, behold and immerse ourselves in.