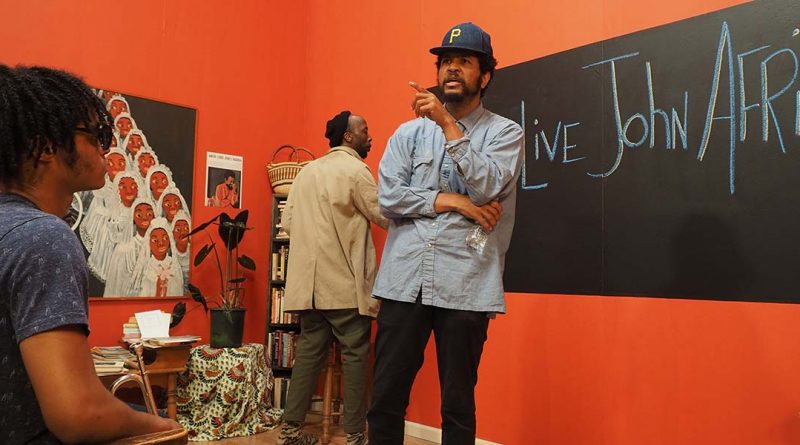 The Inheritance listens and learns from a West Philadelphia collective.

Recent events have encouraged open-minded people to listen, really listen, to each other. Director Ephraim Asili offers the opportunity in his feature length debut The Inheritance, presenting an informative survey of historically significant Black authors and revolutionaries. Details that deliver the greatest impact involve the 1985 MOVE tragedy, when Philadelphia police dropped a bomb on MOVE homes.

The majority of interactions take place in the West Philadelphia home Julian (Eric Lockley) has inherited from his grandmother Elaine Johnson. He and his partner Gwen (Nozipho Mclean) decide to open their “House of Ubuntu,” as they name it, to interested friends, one of them, Rich, a periodically contentious resident. Scenes include action as familiar as preparing food, assigning tasks, reading poetry (notably Sonia Sanchez and Ursula Rucker) or essays, playing jazz, and debating rules to reach consensus. At other times, residents explain and describe the philosophical underpinnings for a supportive socialist versus self-centered capitalist community.

The powerful segments on MOVE are woven throughout the narrative. MOVE’s founder John Africa is celebrated through descriptions of the inspirational goals of the 1970s commune. When it was unjustifiably bombed in 1985, eleven of the thirteen MOVE members there perished, sixty-one houses reduced to rubble. Earlier, in 1978, police arrested nine MOVE members, and two among those imprisoned, Michael and Debbie Africa, pay tribute here to those harassed and victimized in a moving remembrance. The House of Ubuntu’s resilient, idealistic group endeavors to carry on the legacy of courageous activists and accomplished artists.

Free-wheeling, the film at times feels like a documentary, at other times experimental. As it begins, the camera caresses books by and about Black struggle, Malcolm X, Charles Mingus, Frederick Douglas, Gordon Parks, and more. Trusting viewers to pay attention, writer/director Asili doesn’t overwhelm with technical flash. With arresting effect, he does use vibrant, primary color, wall backdrops—orange, green, yellow, blue—to enliven the staged scenes, a nod to Jean-Luc Godard. A work of contemporary activism and historical acknowledgement, The Inheritance is streaming on the Grasshopper Film website.