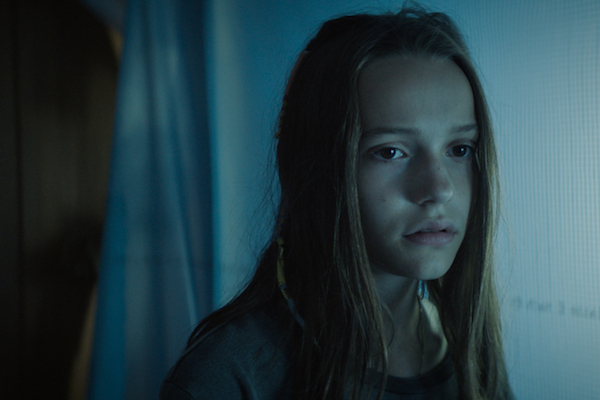 It might seem almost instinctive to position Mia Maariel Meyer’s The Seed on the same spectrum as filmmakers concerned with the human toll of worker exploitation, Ken Loach’s Sorry We Missed You (2019) an immediate reference point here in how it too focuses on the intersection of precarious labor practices with family trauma. And while the comparisons are deserved – yes, Meyer’s film really is that good – it would be a mistake to see it only through the lens of the work of other filmmakers. For what Meyer brings to life in The Seed is not as much the story of the exploited worker himself, an aspiring building site manager called Rainer (Hanno Koffler), but that of his young 13-year-old daughter Doreen, played in a dazzling performance by young actor Dora Zygouri which in largely carries the film.

Forced to move away from her beloved inner-city German apartment to a cheaper place in the outer suburbs due to increasing gentrification, Doreen suffers the culture shock in a way not wholly beyond the experience of other kids her age in similar situations – she is lonely, disoriented, isolated and confused. To begin with, things start to look up. Rainer has his first job as a site manager, there’s a new baby on the way, and the family playfully enjoy renovating their somewhat ramshackle new house in the hope of turning it into a real home. Doreen also makes a friend, the risk-taking, older-than-her age Mara (Lilith Julie Johna) who encourages Doreen to try wearing make-up and, at the more troubling end of the spectrum, to dabble in a bit of shoplifting. But just as Doreen’s life begins to unravel, so too does Rainer’s as he is unexpectedly demoted, despite the promise of his employer that this would be his big shot.

Screening in the Perspektive Deutsches Kino section at the 2021 Berlinale, The Seed ties together these two narrative strands – an alienated, bullied young girl struggling to keep afloat and a man humiliated and disillusioned with his career prospects – through its emphasis on the tight relationship between father and daughter. This is most apparent at the film’s climax, where the two stories that have largely been presented in tandem with each other intersect both through plot and film style in a way that renders the emotional impact of each character’s journey as almost indistinguishable from the other. The Seed is not exactly enjoyable viewing, but it feels urgent and important, and is told with a profound sensitivity, particularly when it comes to the young character of Doreen.