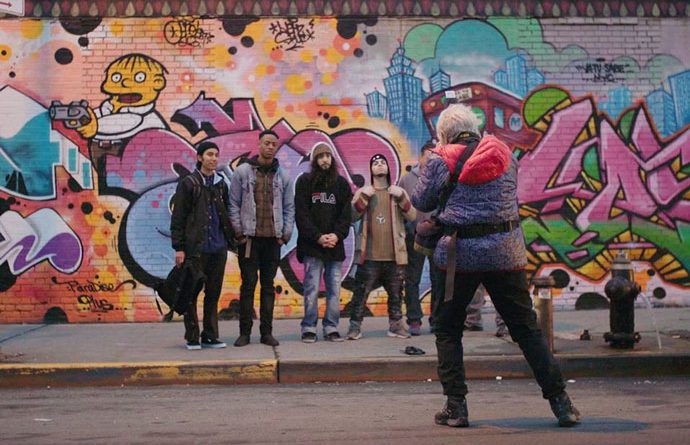 What makes this movie about Martha Cooper so much more thrilling than most documentaries about photographers is the subject herself. From the outside – white, female – she was an unlikely chronicler of the New York City graffiti scene. But her respect for those street artists and her enthusiasm for their art – she often accompanied them into dark train stations in the middle of the night to get the shot – turned her into a beloved icon (a word she hates) and makes her a joy to get to know.

Born in 1942, Cooper started taking pictures when she was a little girl and by the time she was 20, her goal was to work for National Geographic. She went to Thailand with the Peace Corps, then rode a motorcycle – solo – to England. The photos from that trip helped her land a coveted internship with her dream magazine – the first female to do so. From there, she became a staff photographer at the New York Post – again, the first woman in that job.

Between assignments at the Post, Cooper started exploring neglected neighborhoods, especially in the Bronx. She took stunning photos of kids playing with toys they made from trash but she also took the time to get to know them and their parents. She became an accepted fixture on the streets because residents understood she was genuinely interested in them. Through her and her photos, they felt seen.

So, when she started photographing the subway graffiti that fascinated her (and disgusted the city’s authorities), the artists themselves invited her into their world and gave her access to their stealth missions.

In 1984, Cooper partnered with photographer Henry Chalfant for a book, Subway Art. It was published in Germany because no one in the U.S. was interested. The book didn’t generate many sales but was widely shoplifted.

Nearly four decades later, director Selina Miles (in a stand-out feature doc debut) interviews big name street artists who, one after another, call Subway Art their “bible” and explain that, by acknowledging the kind of art they wanted to create, the book changed their lives. This is why representation matters: If you can see it, you can be it.

Subway Art is also a historical document, capturing forever a time that no longer exists. The photographers bemoan the fact that none of the work in their book remains, saying, “If you looked at trains now, you’d never know there was a graffiti culture.”

There’s no doubt that Cooper, who also published books about tattooing and hip hop, is a remarkable photojournalist – and proof that a picture is worth a thousand words. But what Miles captures so well in Martha: A Picture Story is her curiosity and appreciation of real people going about their lives and following their passions – something Cooper knows a thing or two about.

All these years later, though, it still pains her that her male colleagues never took her seriously. “That hurts,” she admits.

Who cares about them? What’s more important is that Cooper’s legacy is celebrated in big, bold strokes by the people whose lives she touched so deeply. It’s hard to imagine there could be a more authentic and meaningful tribute to her than the street art they continue to create based on her photos. They recognize her at events, beg her for autographs and selfies, and tell her she’s like their grandmother. “Mother, maybe,” she corrects them, with a smile.

In a scene that captures her subject in all her glory and gets to the heart of who she really is, Miles follows Cooper, now in her late 70s, when she once again joins a group of street artists as they commit their crimes. She’s joyful – and fearless. “What are they going to do – put me in jail? I don’t think so,” she laughs.

If we could all age as exuberantly as Martha Cooper, none of us would ever complain about getting older.