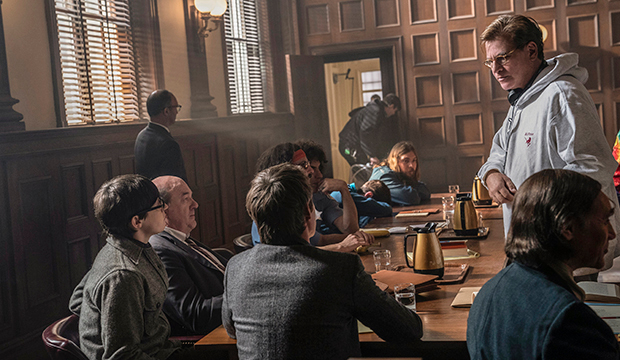 In The Trial of the Chicago 7, writer and director Aaron Sorkin brilliantly dramatizes a shameful event in American history: the US Justice Department’s prosecution of political activists Tom Hayden, Rennie Davis, Abbie Hoffman, Jerry Rubin, David Dellenger, John Froines and Lee Weiner, all of whom were arrested while leading peaceful anti-Vietnam War demonstrations during the 1968 Democratic National Convention in Chicago. They were charged with inciting violence, but footage of police attacking and teargassing them and thousands of their followers was shown on television worldwide. Their case, handled by famed attorney William Kunstler, was a cause celebre.

Additionally, Black Panther leader Bobby Seale was put on trial with the Chicago 7, although he’d been in Chicago to give a speech elsewhere, hadn’t been anywhere near the demonstrations and had never met the seven until the trial, at which he had no legal representation. Judge Julius Hoffman’s incompetent and prejudiced rulings against the seven — and especially against Seale — were evident from the first day of the trial, and his decisions were eventually overturned. He was subsequently

Sorkin’s film captures these real events as a compelling narrative that puts us into the courtroom to witness the most dramatic moments of the trial, but also gives us fascinating behind the scenes glimpses of personality clashes between the defendants and differences in their perspectives on how to end the war in Vietnam. All of the actors in the cast seem to be channeling the historic personas they’re playing. The film has stunning authenticity. That said, Sorkin does take storyteller’s liberties in structuring the scenario and developing characters for maximum dramatic effect and engagement. As a result, the film is entirely entertaining while it serves to educate audiences about historic events that clearly remind us that we must be vigilant to protect our civil rights and uphold justice. Aaron Sorkin spoke with me recently about balancing entertainment and educational value in The Trial of the Chicago 7, and how he develops story and dialogue. You can also watch the interview on AWFJ’s YouTube channel. SORKIN: It’s nice to meet you.

MERIN: Thank you. And, it’s an honor to meet you, and I’m so pleased that I have this opportunity to speak with you. Thank you so much.

SORKIN: It’s my pleasure. Thank you.

MERIN: I’m an ardent admirer of your work. I think that you accomplish rare things in your films. They are always very compelling, and they make audiences think and rethink, perhaps, their preconceptions about what’s going on in the world and even perhaps drive them to take or behave more response-responsibly in society. This particular film, The Trial of Chicago 7, is based on an historic event that happened. It’s an entertaining film that is very educational. It’s telling people about something that they may not know about because they’re young and they haven’t been there. My question to you is, how do you find the balance between the entertainment value and the educational value in your films?

SORKIN: What I cling to are rules of drama that are 2,500 years old, that are written by Aristotle, three centuries before Christianity, about intention and obstacle. Somebody wants something, something’s standing in their way of getting it. And if I stay true to the-the dramatic elements, if you’re telling a good story, and you’re able to tell it well, and when I say tell it well, I’m not talking about just me. I mean, everyone who is involved in making a movie and the 500 things you need to go right. Then it may do more than just hold your attention for that two hours when the lights are down in the theater. It may have a greater resonance than that. So I hope that’s a good enough answer.

MERIN: Yes, it is a good enough answer, I think. Thank you very much. Do you think…

SORKIN: Well let me expand on it a little bit. You can’t do something… first of all, when I sit down to write, whether it’s a movie, a play, an episode of television, it’s not with the goal of educating anyone, or persuading anyone. I don’t have a political agenda. It’s a good story well told is what I’m going for. So there’s a… there won’t be a moment where I feel like “Okay, well, I now want to educate the audience on this, so let me stop the storytelling, while we do some educating.” It’s always got to work as a story that you would tell at a dinner table that would have… make everyone kind of stop eating and listen.

MERIN: Do you think of all historical events and even current events then as potential scenarios or scripts?

SORKIN: No. I don’t. I don’t, you know, read the paper thinking “Hey, that-that would be good.” I certainly don’t look at the front page thinking “That would be good.” Sometimes page 23 will have a story. And, for me, the only thing better than a story you’ve never heard is a story you think you’ve heard. You think you know the real story, but here’s the real story. There was more to it than that.

MERIN: Mm-hmm. Is there any issue or subject that you wouldn’t want to touch with a 10-foot pole? That might be somewhat intimidating or off-putting?

SORKIN: Well, you know, I think that every writer nowadays gets asked about –especially if you’re someone who from time to time writes about stories about politics –what -you know, I’ll get asked about these last four or five years, and, you know, what would you write about this? So, I can tell you that, I think that most writers… and a lot will be written about these last four or five years… but my prediction is that you will seldom, if ever, see Donald Trump as anything but an off screen or off stage character. You’ll see him on the TV on the news. Um, I can’t write that character because he’s implausible. You just wouldn’t believe it, uh, if you saw it. It would… it would just look and sound like Alec Baldwin on SNL.

MERIN: With regard to your dialogue, it flows like music. It’s extraordinary the way that the… there’s an interplay of ideas. I have a friend who is a composer who rides the subway taking down the clickety clacks as musical notation. Do you listen to people speaking in that way? In Chicago 7, you came up with dialog that really sticks in my mind…I mean, especially having to do with Abbie Hoffman, for example saying “Oh, William Kunstler just showed up.”

MERIN: Or the interplay when Abbie finally acknowledges that understands and knows Tom Hayden inside and out. He’s read everything, and there’s a moment between them that’s a fine duet. Does listening to people conversing help you to pull together these moments?

SORKIN: Dialogue is music to me. I’m just like your I’m just like your friend on the subway, who is hearing the sound of the wheels on the tracks as music, which it is. Uh, it’s percussion, it has a tempo, it has a rhythm, it has a time signature. My parents started taking me to see plays starting from when I was very little, and oftentimes, I was too young to understand what was going on stage. But I loved the sound of dialogue. I loved the sound of these great actors using this language that was crashing into each other. And so, I grew up wanting to imitate that sound. What a line of dialogue sounds like…

MERIN: Thank you very much. We’ve run out of…

SORKIN: I was just gonna say what a line of dialogue sounds like is as important to me as what it means.

MERIN: Hmm. I’m sorry that we have to wrap up. I have so many more questions for you. Thank you so much. Congratulations on Trial of the Chicago 7.

SORKIN: Thank you so much. I appreciate it. Well, I hope I get to talk to you again soon.

MERIN: I hope so. Let’s arrange to do that. Thank you so much.