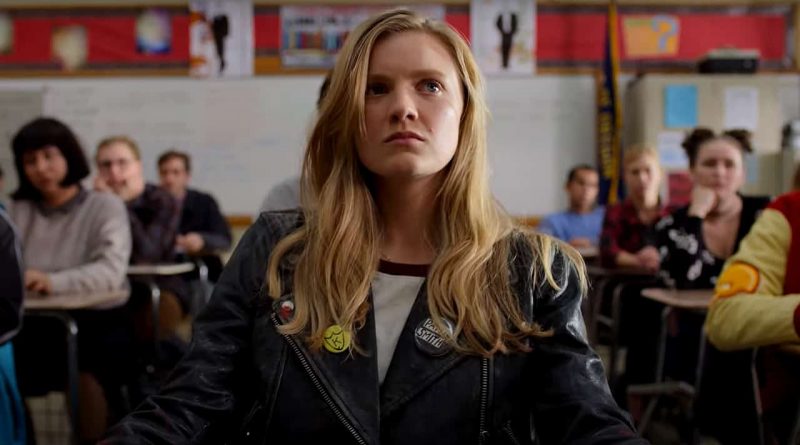 When the principal of Rockford High describes her student body as having moxie, two juniors roll their eyes and implore, “Is she 100 years old?” Moxie is a soft drink created in in 1876 by Dr. Augustin Thompson. He designed the prune-based drink to give the drinker gumption, like pep from Pepsi.

Vivian, one of the eye-rollers, is an introvert. She starts the morning of the 11th grade with a nightmare. Her mother sends her off to school with the reminder to “keep your head up high.” Vivian and her best friend, Claudia, are shy, not given to taking stands. However, she is upset by boys, including their puerile ranking of girls. Vivian, influenced by her own mother’s protests in high school, starts a ‘zine and a movement called Moxie. She and her classmates protest against dress codes that attack young women but not boys and awards that honor boys but not more deserving girls. The moment Vivian sees hearts and stars drawn on others’ hands rouses elation for the revolution.

As common with high school films, the cast of Moxie comprises 20-somethings; still, this cast makes its roles believable, especially Hadley Robinson as Vivian. Also excellent are Alycia Pascual-Peña as Lucy and Lauren Tsai, as Claudia, especially when the second-generation Asian outlines the pressures on her. Nico Hiraga infuses sweet Seth with truth, and Patrick Schwarzenegger man-handles deplorable Mitchell.

Amy Poehler plays Vivian’s mother, but she also directs with profound understanding of justice for all. It covers mother/daughter appreciation, ethnic differences, girls’ essential friendships, disability rights, misogyny, and rape culture. But for all its feminism, the script by Tamara Chestna and Dylan Meyer makes the entire cast call each other “guys,” a micro-aggression that leaves out the very females it purports to support.

The film’s production values are crisp and colorful, and the music, including songs by Bikini Kill and the Linda Lindas, adds serious bounce. Moxie, a spirited film based on a 2017 novel by Jennifer Mathieu, swells the heart and bring tears to the eyes. Moxie matters in its judicious support of young women’s embracing of their power within and without the system.