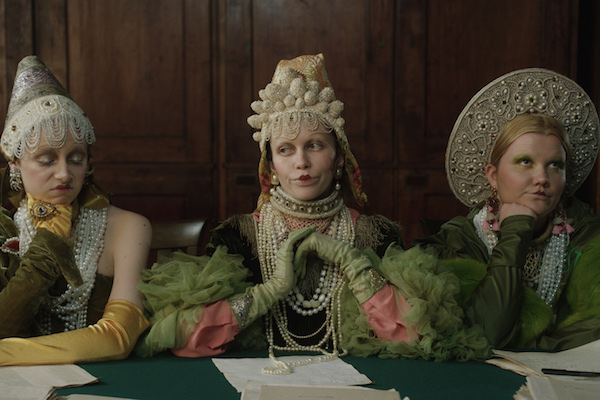 Drenched in folklore but set in an anachronistically banal world of banal, automated bureaucracy, Russian costume designer and fashion photographer Uldus Bakhtiozina holds nothing back in her fiercely stylish debut feature, Tzarevna Scaling, a film whose story might not stay with you forever, but whose striking, bold imagery will be much harder to shake.

Polina (Alina Korol) is a beautiful young woman who works in a fish van. Her colleague and friend is supportive and kind, much needed qualities with Polina faced with the looming presence of some serious family problems. Things take an unusual twist, however, when a regal yet visibly impoverished woman – dressed head to toe in the most striking and unintentional shabby chic – visits Polina to buy some fish heads for her pet cats as a treat. Seeing the young woman’s fatigue, she gifts her with a box of “charm tea”, a product that the emotionally and physically exhausted young woman decides to indulge in when she gets home after a long day, hoping the promise of some rest and positive life change will come through.

Needless to say, it does – and how. Waking up Alice-like in a strange yet oddly familiar world, Polina is now first in line to attain the status of a Tzarevna, princess-like figures from Russian folk stories. But at job is a job and bureaucracy is bureaucracy, and as she meets a range of enchanting, peculiar and often confronting women on her journey, Polina discovers if she has it in her to truly become a Tzarevna, or to be stuck forever dreaming about it like so many others.

There’s an airy, carefree and almost punk rock spirit to the way Bakhtiozina’s dizzying world building exercise refuses to spoon-feed her audience on the folk history behind her tale, and instead, she throws us into the deep end as unexpectedly and as overwhelmingly as she does Polina. That Bakhtiozina’s career until now has been largely in the visual arts is no surprise for it is here where Tzarevna Scaling truly excels; Bakhtiozina has referred to her aesthetic as “Tatar Baroque”, and there is simply no better way to describe the dazzlingly original style of the film, especially when it comes – unsurprisingly, considering her background – when it comes to costuming.

Where Polina and another woman wear elaborate swan headdresses and feathered micro-gowns as they arm-wrestle next to a swimming pool will no doubt remain one of the film’s most breathtaking images, and why it’s happening is almost beside the point. Recently playing in the Forum section of the 2021 Berlinale, Tzarevna Scaling is a feast for the senses, Bakhtiozina’s astonishing visual eye excelling, almost distracting us completely from fact that the story has some way to catch up to equal it; Tzarevna Scaling is an experience, first and foremost, and a memorable one at that.