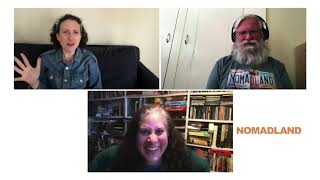 Knowing the fascinating backstory of Chloe Zhao’s Nomadland gives audiences additional appreciation of this film’s unique style and universal appeal. Sandie Angulo Chen get the inside scoop from two of the film’s backstory principals, Jessica Bruder who wrote the book behind the adapted script and Bob Wells, a Nomad clan leader who added his own unique voice to the screenplay. Both were mentioned by Chloe Zhao in her Golden Globes acceptance speech. Sandie Angulo Chen chats with Bruder and Wells for their take on Nomadland.

Sandie Angulo Chen: Hello, Jessica and Bob, it’s nice to meet you over Zoom, I’m coming to you from my college aged son’s bedroom, which is why there’s a lot of books in the background. So congratulations to both of you. You both got mentioned in Chloe’s acceptance speech at the Golden Globes. And you know, Jessica, when you started the process of writing your book, did you ever imagine it would get turned into a feature film?

Jessica Bruder: Oh, hell, no. It started as a magazine story, which I felt was lucky to place and then evolved into a book. And somebody asked me when I was writing the book, did I imagine somebody as a leading lady? And I was thinking, no, I was trying to write the book that was hard enough. So this is all been a surprise, but a really good one.

Sandie Angulo Chen: Yeah, I’ve been a fan of your work. You know, I lived in New York for many years and you’re Burning Man book and just sort of the way you capture subcultures. And I think we all, just as human beings, have a fascination with subcultures. And I know that this one just has seemed so fascinating to me because I know a woman who left her husband to live in a jeep and just go. I mean, this is instead of them having to get a divorce and get two houses.

And she just said, no, I’m going to just live on the road, on my Jeep, in my jeep. And I was like, do people really do this? And seeing your your you know, your book and the film and then Bob’s work, it’s really clear. Yes, people do do this and they can have fulfilling lives. Well, while doing it. You know, Bob, the it’s amazing to me that you’re not an actor because you’re working in the film, even though I know it’s it was probably improvised is so beautiful. And you know how much of what you said was you, Bob, and how much of it was scripted or a film version of Bob?

Bob Wells: I think most all of what was made into the film was just me. She tried to get me to act and I’m not a good actor I’m afraid ot say, so I think it’s mostly just the stuff that was actually me. I think that was about all she could use. But that’s mostly.

Jessica Bruder: OK, well, my role was earlier on, so I guess I’ll start, but when the option turned into the project, I really just raided my recording pantry and tried to give Chloe and the team everything that I could from old pictures. They recreated some stuff that I’d seen in twenty fourteen just on the notes to audio recording to just just my sock drawer. I basically turned it out and I introduced them to people. And so that was a lot of my job. I was kind of a fixer and Bob?

Bob Wells: The word got out in the Nomad community, the film was being made. Chloe started going around and meeting people where they lived and word got back. Then she eventually contacted me and I said, sure, I’d love to help in any way I can, and really, there’s just not much of a story there.

Sandie Angulo Chen: What are the various reasons that you have found throughout your years of being a nomad and you, Jessica? And in researching this lifestyle, that that people are compelled to to sort of start living on the road? It was at fault for either of you, really like I know that obviously the the movie itself features, you know, grief and loss as a major theme. But I imagine that people have a variety of reasons.

Sandie Angulo Chen: And I was just wondering if, you know, what are some of the more compelling ones that you have heard about by being part of the community?

Bob Wells:
Well, I’ll jump in, I don’t and grief and loss is large, poverty is large, but I’ve heard all kinds of people. You mentioned earlier your friend, who… I’ve known a lot of happily married women who just needed to travel and needed to get out of the house. And so they jumped in their van and they’ll spend two or three months in the winter in the desert.

Bob Wells: I’ve known many women in exactly that situation and less men, but some. I know a guy who made, several guys, that got rich coding in Silicon Valley. I know guys specifically who now lives in a minivan and travels around — a million dollars in the bank — was in a minivan. And one other guy who lives in a Subaru Forester. I don’t know how much money he’s got in the bank. He’s got a lot. This the life he chose. It’s a broad spectrum. It’s a broad background spectrum.

Sandie Angulo Chen: And I’m getting a wrap up, please, notification, so I guess my last question to you is, what do you hope viewers will take away from seeing the film?

Jessica Bruder: I hope that people feel connected. That’s one of the best responses I got to the book was that people were saying, you know, I walked past somebody who was clearly living in a van and instead of just jumping to weird, unfounded conclusions, I thought to myself that somebody who is a story and that sort of curiosity about our fellow humans and that kind of compassion, that’s just something that I think we could use a lot more of in the world, and I I hope the movie will inspire it.

Bob Wells: And for me, I hope people realize they have an option. Jessica talks a lot about subcultures, that subcultures are real and they do offer a valid choice.

Sandie Angulo Chen: Thank you both so much for your time. I appreciate it.

You can see the entire interview on video on AWFJ’s YouTube Channel.