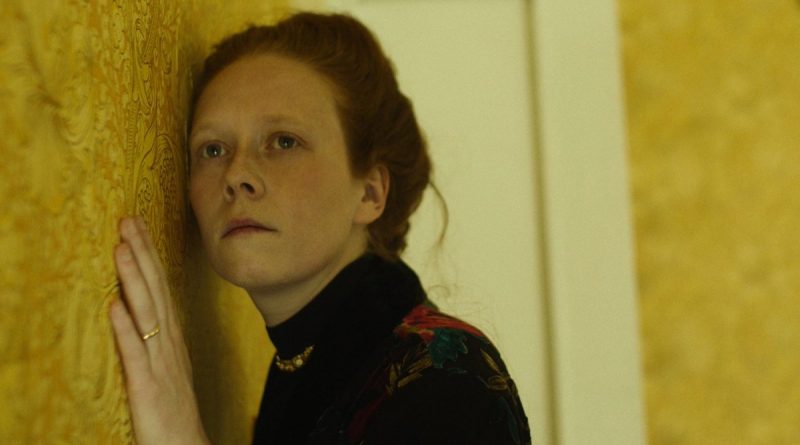 Based on Charlotte Perkins Gilman’s delicately brutal 1892 novella, The Yellow Wallpaper (1982) is a delicately evocative horror story of the first order, rooted in the reality of post-partum depression and added burden of its pernicious denial.

Young wife and mother Jane (Alexandra Loreth) is trapped on every front. Her husband John (Joe Mullins) and brother James (Mark P. O’Connor)–both physicians–are quick to ascribe her pervasive unhappiness to hysteria, a catchall term designed to blame a multitude of woes and malaises to the mercurial vagaries of women’s wombs. John’s solution is to move his young family to a genteely rundown country house while their eventual home is being renovated. All very well for him–he has his work to keep him rooted in everyday social intercourse. But Jane is left alone in the countryside to enjoy a “rest cure”–a construct painfully close to solitary confinement–while her baby is cared for by others–she’s deemed too nervous to do motherhood right–and free of distractions, which naturally means she’s bored to tears. John has even forbidden her to write in her diary lest it prove too stimulating for her.

And so Jane–who would like nothing more than to leave her comfortable but intellectually stifling prison–becomes both depressed and obsessed with the wallpaper in their bedroom, a riotous tangle of vines and flowers in shades of yellow, each more obnoxious than the other. The more she gazes upon the yellow wallpaper, the more she see discord and disturbance, fueling the fire of frustrated discontent and eventually including the shadow of a woman, imprisoned behind the twining stems, leaves and blossoms and silently screaming to get out.

Clocking at just over 6100 words, Gilman’s Yellow Wallpaper is a spare literary and distinctly feminist counterpart to painter Edvard Munch’s many 19th- and 20th-century variations on The Scream… but Perkins’ is rooted in the fact that for women of her era, the world was first and foremost made and defined by men. Perkins was a rebellious writer–perhaps never more so than in her 1915 novel Herland, a work of speculative fiction in which a trio of dudes, each defined by a different stereotypical idea about the nature of the female of the species, find themselves in a world made by and for women. But The Yellow Wallpaper (a ‘Hysteria Pictures Production’) is rooted in oppression, the bone-deep knowledge that woman were/are born to be defined by their relationships with men: Sister, mother, wife, daughter, aunt, niece. Though it’s easy to laugh and say everything is different now, it’s also reductive: Women still shoulder the bulk of childcare unless they’re wealthy enough to financially exempt themselves, and many women able to pay others to care for their sons and daughters feel and/or are made to feel that they’re shirking a sacred duty. Depression is notorious for haunting women pulled in too many conflicting directions and haunted by the fear that they’re always giving someone or something short shrift. The filmmakers even manage to sneak in a hint of Lovecraftian creepiness (by way of Robert W. Chambers’ The King in Yellow) without veering sharply into flat-out supernatural horror).