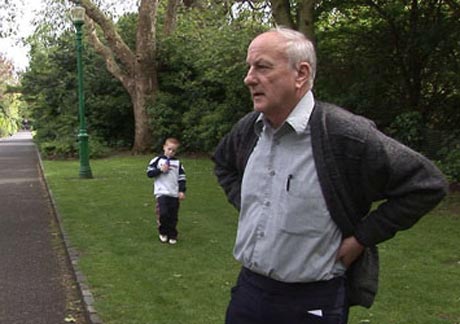 Deliver Us From Evil is a compelling exposé about the ongoing pedophilia of Father Oliver O’Grady and extensive child abuse by the Catholic clergy.

In her Academy Award nominated (2006) documentary, Deliver Us From Evil, director Amy Berg uses gripping testimony by victims, interviews with expert witnesses and archival footage to reveal the Catholic Church’s shocking cover up of ongoing incidents of child abuse by members of the clergy.

The film focuses specifically on the case of Father Oliver O’Grady, the notorious pedophile priest who raped and sodomized hundreds of boys and girls aged nine months through adolescence, and one adolescent victim’s mother, over the course of 20 years.

During this time, church superiors avoided exposure to scandal by reassigning O’Grady from one California parish to another, never punishing him, failing to prevent his ongoing predatory behavior and never protecting parishioners from his ongoing abhorrent abuse.

O’Grady was eventually tried and put in jail. After being released from prison, he was deported to Ireland, where he currently lives comfortably in retirement. He is still ordained, enjoys his pension and roams freely.

Berg’s recent interviews with O’Grady show the priest’s flippant attitude. Oozing indifference, he is utterly without remorse about his heinous behavior and the devastation he caused his victims and their families.

In contrast, as they recall O’Grady’s actions, the victims and their families erupt with anguish and anger-—and enormous frustration that there’s been no prosecution of Los Angeles’ Cardinal Roger Mahoney who, according to the film, knew of O’Grady’s crimes but did nothing to stop them.

After seeing and listening to the victims’ testimony about what happened, it is very easy to understand and empathize with their rage: Mahoney still rules the Los Angeles Archdiocese.

The film traces the trail of deceit and shame all the way to Pope Benedict XVI, who has been accused of conspiracy to cover up the crimes. According to the film, the Vatican asked President Bush to grant the Pontiff immunity from prosecution—-and got it. Continue reading on CINEMA CITIZEN