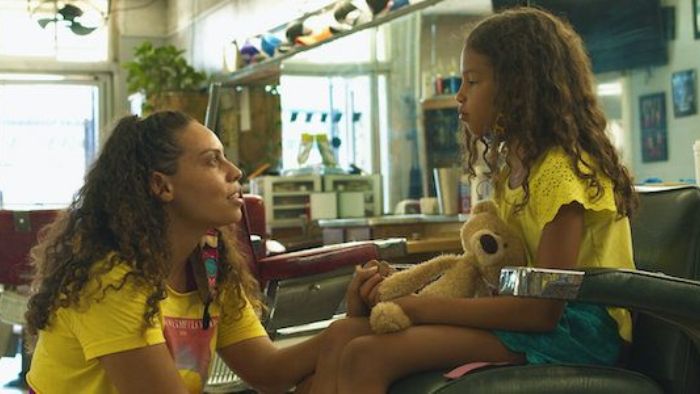 The COVID-19 pandemic isn’t the crux of the story in I’m Fine (Thanks for Asking), but it adds a relatable layer to this endearing feature about a single mom’s daylong hustle to earn cash for an apartment. The film debuted this week at SXSW Online 2021 and earned Special Jury Recognition for its multihyphenate storytellers.

Danny (Kelley Kali), a recent widow, lives with her daughter, Wes (Wesley Moss), in a tent outside LA, although Danny fibs by saying they’re camping for fun. While Wes stays with a friend for online learning, hairdresser Danny gets around town on roller skates, visiting clients and assuring her prospective landlord that she’ll pay him the following day. Then one client stiffs her and another cancels, forcing Danny to deliver food and wonder how she’ll make it all work out.

Co-directors Kali (The Adventures of Thomasina Sawyer) and Angelique Molina, making her feature debut, dress Danny in bright colors like the neighborhood playground and photograph her in the sunshine, cheerful counterparts to the pressure on her. Kali says that director Sean Parker (The Florida Project, Tangerine) is one of her influences, recognizable in highlighting this woman on the margins as well as in wide shots of Danny and Wes walking from their makeshift home to the city at large.

The filmmakers, who co-wrote the script with Roma Kong, keep up the momentum as Danny’s day sours, with an awareness of COVID-19 along for the ride. Danny and her customers wear face masks, the landlord frets about germs, and Danny insists, “I’m fine, I’m fine” whenever someone asks about her, Wes, or her late husband.

Danny never wants to stop to talk for long, as if she can will what she needs into existence by momentum alone. She crosses paths with people whose timing or advice couldn’t be worse, such as a flirty high-roller in a convertible (Deon Cole of Grown-ish) and her chatty friend Brooklynn (BK Marie) who provides a joint and some comic relief. (“All your ideas end up like this, Brooklynn,” Danny notes.) Danny finally lets down her guard and also winds up in a tree, literally out on a limb, and imagining that she’s underwater. But the filmmakers care too much about her to leave her hanging, offering a solution that gives her growth and grace.

A small story with large stakes for its main character, I’m Fine (Thanks for Asking) reminds us there’s a lot going on in someone’s life, even when they insist all’s well. It’s an appeal for empathy with a lot of heart.