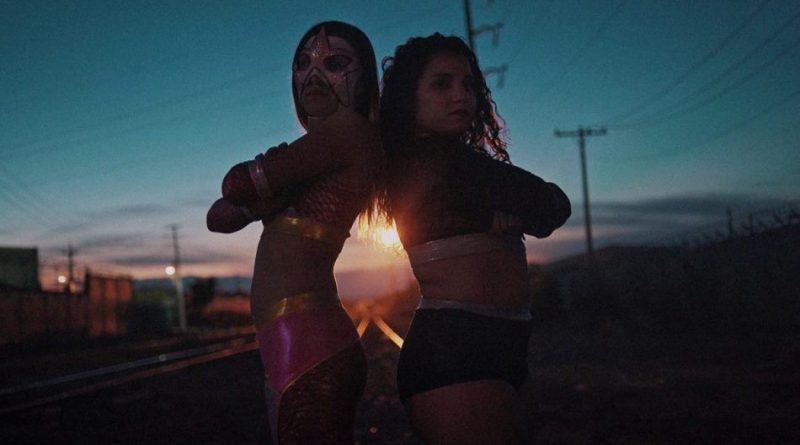 The female wrestlers of the documentary Luchadoras, premiering at SWSW Online 2021, have more to battle than just opponents in the ring. In Ciudad Juárez, Mexico, where they live and work, it’s an achievement for women to stay alive.

That’s no exaggeration, as directors Paola Calvo (Violently Happy) and Patrick Jasim, in his feature debut, make clear in the opening moments. As female factory workers ride a bus, luchadora Lady Candy recalls harrowing tales her grandmother told of bus drivers taking women the wrong way and raping or killing them. So many women’s remains have turned up in the desert, where they will scream forever because no one helped them, she later says.

Posters around the city show photos and tallies of missing women, 92 in 2019, while marchers organize rallies, giving voice to the missing and advocating that women matter. Sometimes they rally crowds before wrestling matches, where those appeals seem to carry more weight.

Candy, 23, earns $75 a week cleaning and delivering caskets. By night, she tangles with various opponents, including the other women highlighted here, earning belts, her name on posters, and spectators chanting her name. She wants to see her two young daughters again. Her ex-husband took them to El Paso, Texas, apparently without her consent, and often dodges her phone calls. Her boss urges her to speak with an attorney, then get money for a visa through a wrestling match.

Candy applies for the visa, explaining to one official that they divorced over violence. He beat her. “What else?” the worker asks.

Elsewhere, Baby Star, the twentysomething daughter in a lucha wrestling family, and her teenage sister, Little Star, team up against men and women. Baby Star’s dad was a wrestler who trained her because he had no sons. She likes wearing a mask wherever she goes because she would feel “ashamed” if she were to lose. When one opponent yanks it off, forcing her to hide her face behind her hair and hands, the crowd yells in her defense until she gets it back.

She yearns to return to Mexico City, where she had more of a wrestling career before her daughter’s birth. The child’s father, another wrestler, isn’t so sure about that. If she left, he’d be responsible for their daughter’s care, and you can’t replace a mother’s love, he says.

Lastly, Mini Sirenita, is a little person and factory worker who trains with Candy, admiring her commitment. Her adult daughter now lives in Mexico City, and Sirenita hopes to join her there. People ask her if she likes getting beat up. She answers that if someone wants to beat her, they have to pay her first.

While only two of the luchadoras has a complete story arc, these glimpses of their lives stir admiration. At various points, the women pose for promotional photos in their wrestling attire around Ciudad Juárez and the border wall, watchful for drug dealers and others following them out of curiosity or wanting to protect their territory. It’s a hardscrabble life, and the ring offers dangers, but they find rewards as well: that extra cash, a workshop where they teach other women self-defense, and respect.

“You are a warrior and a fighter,” a friend tells Sirenita after praying for her. True enough.