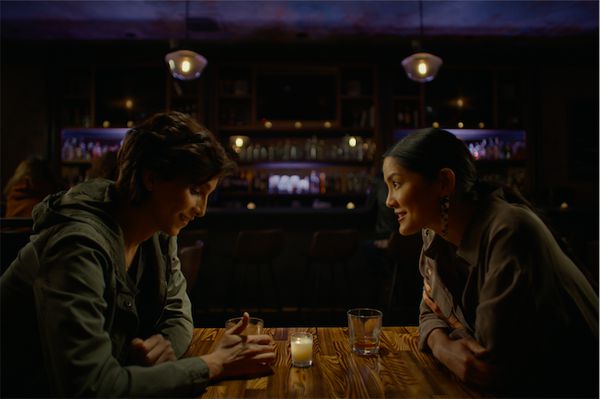 Trans writer/director Mari Walker’s first narrative feature is a confessionalist character study called See You Then, a story that takes place largely over one evening between two people with a complicated history seeing each other for the first time in over a decade. Kris (Pooya Mohseni) and Naomi (Lynn Chen) were once in a cisgendered relationship. Years after abruptly breaking up with Naomi, Kris, having transitioned, calls her and asks to get together for dinner. Naomi has since abandoned her art to become a professor, and is a wife and mother of two, and Kris has had to learn how to live in the world as her authentic self and work on her beliefs around self-worth. They’ve got a lot to catch up on and a lot of unfinished business to deal with from their past, so the evening gets understandably complicated and emotional.

While the script has strong moments that ring true, it is in the delivery of Walker’s written dialogue through the performances that See You Then comes alive. There is chemistry there, and a willingness to expose their characters’ long submerged raw, frayed feelings that drives the story forward and has the viewers hoping these two will find a way to forgive each other and themselves. When a wound is revealed that has never been triaged much less healed, we question if they can do anything more than walk away and never speak again.

Walker doesn’t shy away from awkward silences, or moments in which one of the leads goes inward, or inappropriate, potentially alienating reveals by either protagonist. At times it feels like we as the audience are unwanted interlopers in a very private conversation. All this makes the strained relationship more believable.

If the cast and crew of See You Then is blessedly diverse, it’s not an accident. Knowing Walker’s own personal story, it makes perfect sense. She grew up in a household that was bi-racial, half white and half Asian, but because her family had been interred at a Japanese concentration camp during WW2 and came back to a house torched by racist white neighbors, her grandparents stopped including Japanese as part of her mother’s upbringing. By the time Walker was born, there was little to no Japanese culture still part of her family. She knew she was trans from a young age, but tried to live and work as a young man, until she realized it was no longer possible if she wanted to live authentically. Once she transitioned, Walker’s film work shifted to be more diverse, emotional, and character-focused. She started hiring a wider spectrum of performers. As she put it, “My creative work shifted towards deeper understandings of character and emotion, opening new themes I had always cared about but was afraid to express publicly. I focused more intently on representation in my own work — something I was less aware of before as a result of my privilege. I began to understand how I had become accustomed to instinctively thinking about white actors in roles instead of acting based on talent. This also extended to my own connection to my Asian-American heritage, which has only strengthened throughout the process of transitioning. I have now made it a point to have Asian-American representation in my future films in front of and behind the camera.”

See You Then is an unusual drama in both subject matter and representation, and it is told by a voice too often silent in films about trans issues. Here’s hoping it finds a larger audience and wider distribution.