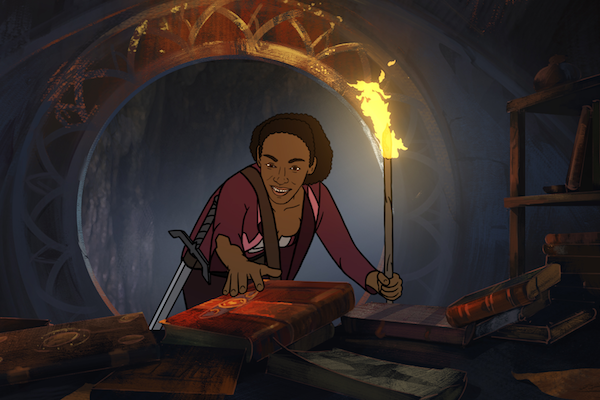 Sometimes, a cast so wildly perfect comes together that the context of the film in which they work on together feels almost like an afterthought. The Spine of Night is a case in point: Lucy Lawless, Richard E. Grant, Joe Manganiello, Betty Gabriel and Patton Oswalt, with indie genre film darling Larry Fessenden thrown in for good measure. Surely not since Alejandro Jodorowsky dreamed of putting Gloria Swanson, Orson Welles, Mick Jagger and Salvador Dali in his unmade adaptation of Frank Herbert’s Dune has such casting catnip been sent forth to tantalize cult film fans; thankfully, unlike Jodorowsky’s vision, this one came together, having its recent world premiere at the 2021 SXSW.

As impressively alluring as the casting alone is, where The Spine of Night becomes even more fascinating is in the fact that this is an animated feature film. But this is no children’s movie, not by any stretch. Aside from the violence, blood and gore, there’s also genitalia akimbo; boobs, balls and everything in between rendered in lovingly graphic detail in vibrant, intricate color.

The fantasy artwork of Frank Frazetta and adult animation of Ralph Bakshi have been explicitly named as inspirations for The Spine of Night, whose complicated, elaborate plot tells of a magical blue plant that wreaks havoc as the powers it bestows upon those who control it unleash the very worst of human nature – but in the case of a few, the very best as well. To reveal more would perhaps destroy the joy of discovery, but the essence of the film surely lies just as much (if not more) in its aggressively determined creative vision than storytelling alone.

A directorial collaboration between Philip Gelatt and Morgan Galen King, each has strong form in their respective fields and brings it to the project with enormous success. King’s background is in animation, and he had already made a rotoscoped fantasy film with 2013’s Exordium, so at first his donation to the project is hard to miss. Gelatt, however, is a fascinating collaborative figure here; a hugely underrated filmmaker in his own right, the science fiction movie Europa Report (2013) and the horror movies The Bleeding House (2013) and They Remain (2017) reveal a filmmaker gifted in the art of world-building, which – ultimately – is where the real power from The Spine of Night lies once one recovers from being so star-struck by its superb cast.

In The Spine of Night, guts explode with a speed and velocity equaled only by how fast this movie blows our minds; audacious, dazzling and fierce, this is fantasy filmmaking with no limits.