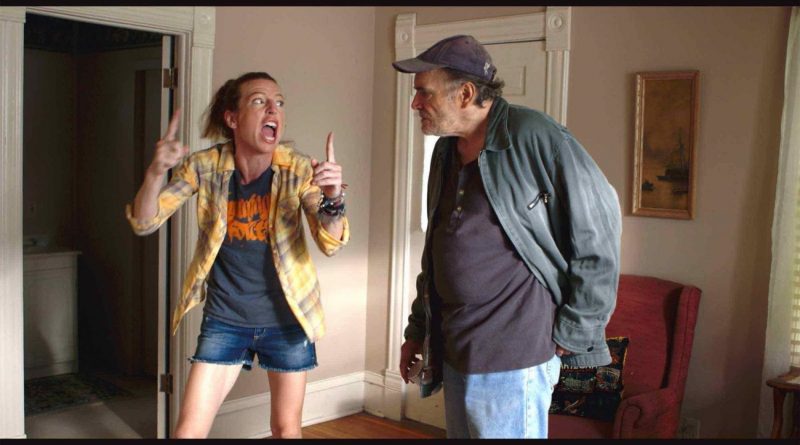 In Two Ways Home, director Ron Vignone addresses a prevalent, persistent issue. How does a bipolar individual, working toward self-respect, gain understanding, much less acceptance, by people unfamiliar with the condition? Add to this challenge a young woman, identified only as Kathy, recently released from prison and now returning to her rural Iowa home and hostile relatives, including her very angry twelve-year-old daughter Cori.

The opening scene, in particular, captures the voices and visual disorientation Kathy experiences, impacted by her bipolar disorder, during an armed robbery of a convenience store. Arrested and sentenced, released for good behavior, Kathy doesn’t immediately return to her community: her daughter, mother and father, aunts, uncles, and ex-lover/father of Cori. They resent her absence and just about everything else connected to Kathy. She does find some camaraderie with her grandfather Walt whom she brings from a nursing home back to his dilapidated farmhouse that, to his dismay, she’s cleaned and rehabbed. Walt battles his own problems, untreated PTSD. What Kathy most needs is a chance, which a diner owner provides. Similarly, what will help Walt is care and kindness.

The technical aspects at times show the independent pedigree of the film, meaning the staging and editing are sometimes less than elegant. However, the truthful confrontation of the stigma and misunderstanding of bipolar individuals more than compensates for any production shortcomings. Moreover, the contrast between the emotional distress and the idyllic Iowa landscapes that punctuate the family interaction adds impact, a reminder that mental struggles occur in every environment—city or farm, with young or old, of any ethnicity and class.

A film such as this, focused on psychological and medical issues, relies for success, more than most films do, on convincing performances. In that regard, Two Ways Home delivers. Instead of stars showcasing their ability to inhabit mental struggles, here the heartfelt presentation benefits from relatively unknown actors burrowing into their characters’ complex emotional lives. In other words, star turns don’t distract from the important focus on bipolar and PTSD issues and the reactions of the community in which they live. Tanna Frederick, in particular, delivers a nuanced embodiment of Kathy’s internal and external difficulties. She must monitor herself, maintain her self-esteem, and educate, if not battle, those who still adhere to the unhelpful and wrong-headed ideas about mental issues. She’s done her homework and has clearly, carefully observed this world.

In an interview at the Women Texas Film Festival, Frederick and Vignone explained their reason for changing the film’s title from The Farm to Two Ways Home. It suggests the different ways that a person can return to a previous place and life. This includes Kathy and Walter. In fact, in their own ways, each person must find a way of coping with internal and external issues. Kathy decides, after helpful counseling, to embrace her difficult relationships quite openly and courageously. She then must hope for their positive response and not give up hope if it’s not immediately (or ever) forthcoming.

Shooting on location in Iowa, in fact in part at Frederick’s family farm, the film also benefits from casting of local residents. In other words, the film feels real from place to person. As the grandfather Walt, Tom Bower adds impressive authenticity, as do the many supporting characters, greatly enhancing its appeal. It isn’t flashy; it is better than that. It’s honest in its invitation to consider those involved in and affected by mental illness, knowing the ripple effects reach far and wide. Moreover, it furthers the knowledge that everyone needs more information and can be educated through a sustained commitment if they only care.

Director Vignone says he made the film in the hopes of “taking the shame out of our conditions—whatever they may be, and however they manifest in our lives.” He has succeeded in encouraging more needed discussion and empathy. Significantly and important to note, the National Alliance on Mental Illness has endorsed Two Ways Home. The film is available on multiple platforms.