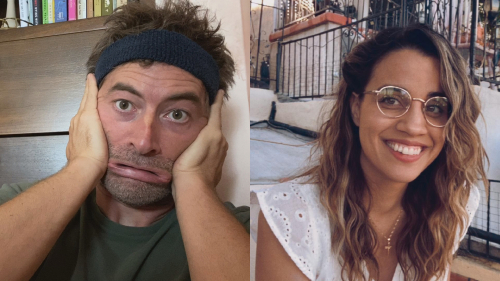 The pandemic’s challenge to the movie industry has certainly pushed the envelope on cinematic creativity. When scheduled productions large and small, studio and indie, were simply shut down or delayed, cinema creatives who work above and below the line were left with a frustrating dearth of work and angst galore.

But, to quote that old saw, necessity is the mother of invention and talented filmmakers began developing new projects with adjusted production strategies and methodology so they could bring new and engaging stories to screens. There has been so much inventive production that has resulted in so many — mostly small and indie — movie that we might site ‘pandemic production’ as a new moving image genre.

Language Lessons, which had its US premier at SXSW 2021 Online, is a fine example of pandemic moviemaking at its best. Its conceit is simple, believable and appealing. There is nothing gimmicky about the production. Almost all of the action takes place via the internet — so there’s no need for social distancing and any inherent concern about or danger of contagion is eliminated.

Language Lessons is essentially a tale of two characters who meet serendipitously on the internet. The story begins with their first encounter and follows their developing relationship as they find in and for each other the kind of compassion that’s the foundation of true friendship. From afar and via the internet they offer each other support during harrowingly emotional experiences. Continue reading on CINEMA CITIZEN.